The Honduras Bay Island of Utila will be memorable for two things – freediving and the wind.  Freediving is diving without scuba gear – something that had always intrigued David. 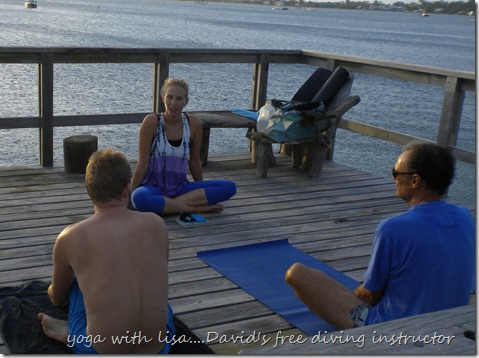 When he discovered that Lisa, our fantastic yoga instructor, also taught freediving he needed no encouragement - he was in, fins and all.  First day he dived to 12m and the second to 20m…holding his breath for an astonishing two minutes.   Not bad for a first timer… and on old timer! 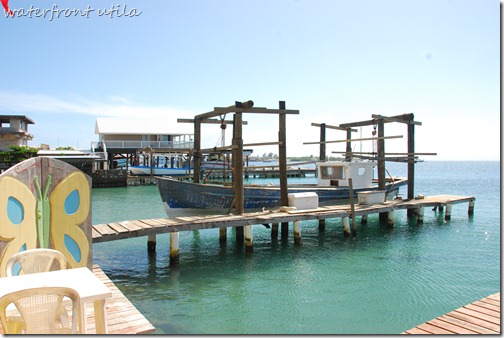 Freediving simply means diving without bottled air, as David says – “Just a breathing procedure lasting about two minutes a big breath and down you go.”  There is some necessary breathing techniques and safety stuff to learn first of course.  He had some trouble getting deeper than 12 metres because he could not equalise his ear pressure.  “However once I figured that going feet first worked I was able to plummet like a stone to 20m!  (66 ft).  Rest assured this will be a personal best as I have no intention of having a go at the record of 101m, but the experience was great and the adrenaline rush must have got rid of my shingles!,” he says. 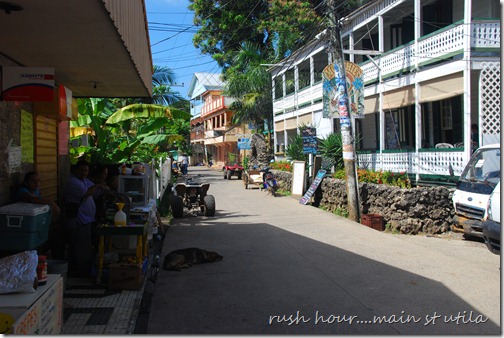 But back to the wind.  We left the neighbouring Honduras Bay Island of Roatan with strong winds forecast, but didn’t feel we were in a secure enough anchorage to sit them out there.   It was a brisk sail across to Utila, with a messy swell, but as we arrived the winds lightened and the anchorage was beautifully sheltered- not for long! 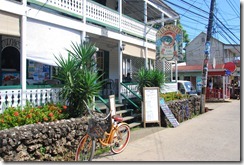 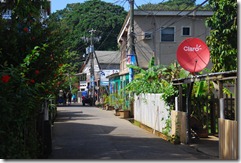 Utila is a hangout for backpackers – as opposed to Roatan which is full of expatriate Americans, wealthy tourists, cruise ship passengers (about 10 ships visit a week) and washed up yachties.  It didn’t rate that highly with us but was a good place to wait for David’s shingles to improve.  Utila, with its laid back atmosphere, quaint shops, dozens of dive centres and hundreds of young people was far more our scene. 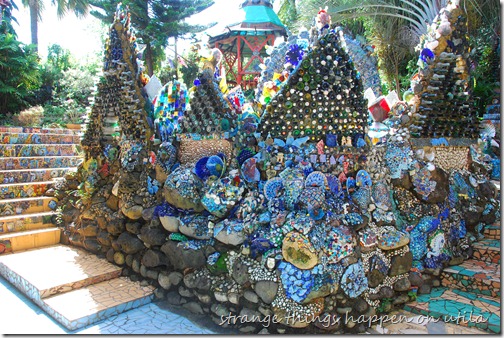 We’ve found throughout our travels that we really enjoy young people – they are so energising, interesting and inspiring.  And of course backpacker haunts are always cheaper than high end resorts! 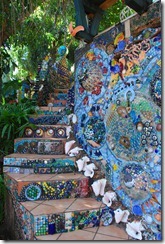 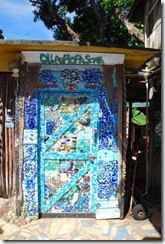 Utila may not have the multi million dollar resorts that Roatan does but what it lacks in flash hotels it makes up for in cheap and cheerful atmospheric cafes, bars and restaurants….some are downright weird (see pix above!).   There are more tattoos, dreadlocks, piercings and alternative clothes on show here than elsewhere in the Caribbean too. 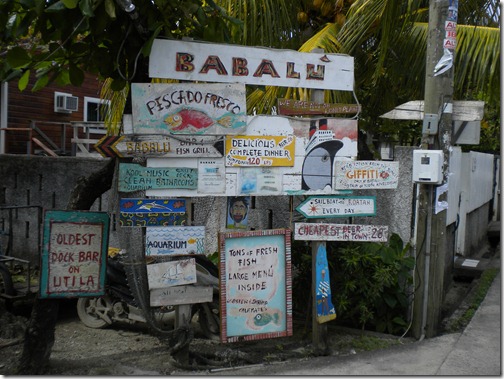 But (once again) back to the wind.  The one thing people never tell you about in the Caribbean is the wind.  Before we sailed to Greece well meaning people warned us about the Meltemi but noone ever mentioned the Caribbean trade winds and, to be honest, since arriving in the Caribbean December 2011…it’s done nothing but blow.   Give us a good Greek Meltemi any day of the week! 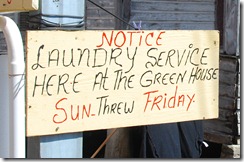 So there we were stuck in Utila with winds of up to 35 knots blowing day and night.  Then there was the odd torrential rainstorm just to keep us on our toes and fill our water tanks - we collected 300 litres in one downpour!  We also managed to get totally saturated in the process as we’d been in town for a meal when the deluge began. 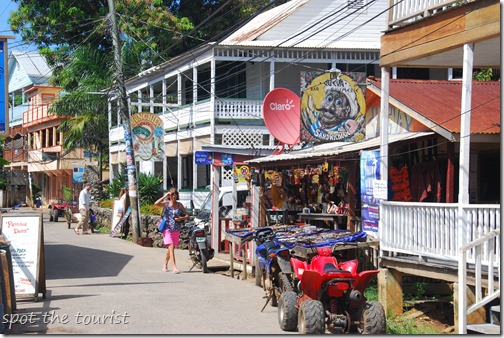 The wind was very frustrating and meant we couldn’t get down to the picturesque cays at the bottom of the islands or do any snorkelling – it was just too windy and rough.  Luckily Utila had enough to keep us occupied – internet, free Spanish lessons and of course, David’s freediving course.  We both also did the sunset yoga classes with Lisa on a dock over the sea – fantastic location and amazing classes. 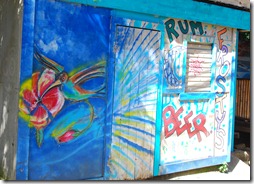 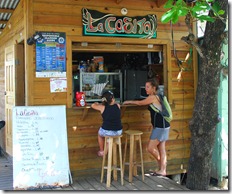 We were relieved when the wind eventually eased and there was a window for an overnight sail to the Sapodilla Cays in Belize.  We left in company with Kiwi mates Mark and Amanda on Balvenie.  It’s always nice to sail in convoy in these waters which are generally safe but there has been the odd incident of piracy including one last year. 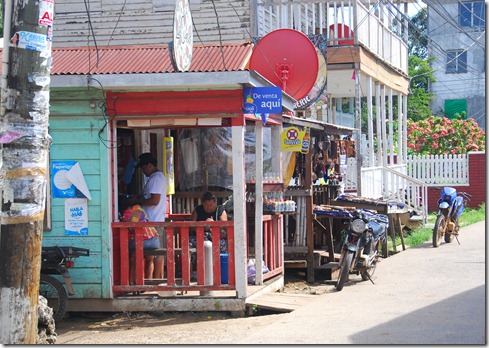 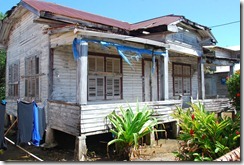 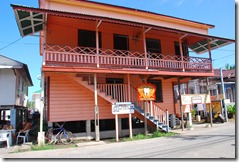 As we gingerly picked our way through the coral reefs at the bottom of Utila we caught a tuna – first fish of the season!   Dawn brought us to beautiful Nicolas Cay – which we visited last season.  It remains one of our favourite and most memorable anchorages in the Caribbean with its crystal clear water, fantastic snorkelling and gorgeous white sandy beaches.  Within minutes of anchoring the caretaker paddled out saying he remembered us from our last visit and did we have the cigarettes we had promised him!!  We did and handed them over along with a couple of cold beers! 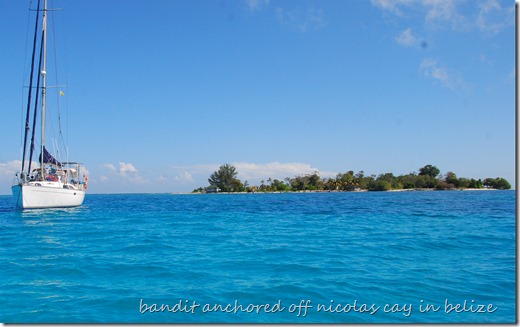 We stayed for a couple of days enjoying the remoteness and tranquillity and some fantastic snorkelling.  Highlight was watching two beautiful spotted eagle rays feeding. An interesting experience was having a small reef shark swim right up to us – so close that David had to punch it in the nose…just to let it know who was boss.  It was our third shark sighting in as many days.  Most of the sharks here are harmless nurse sharks…but seeing them still is a bit spooky.  There is a “norther” forecast – a cold front heading down from the US with strong winds – so we’re now tucked up in Placencia on the Belize mainland for a few days to sit it out.  Looking forward to exploring the rest of the beautiful Belize Cays and the famous Blue Hole.

Posted by Brenda Webb and David Morgan at 17:42