We had a ripping sail from Mohammedia to the Canaries.  With 15-20 knots of wind on the aft quarter Bandit just raced along at a consistent 6-7knots.  We were thrilled that she seemed to grow legs on her first ocean passage and she was very comfortable.
Graciosa is the smallest and northernmost of the Canary Islands and a weary crew anchored there just on sunset, poured a huge Dark and Stormy, had a bowl of hot soup then bed.  After a solid 10 hours sleep we were off to explore the main town of Caleta del Sebo….a tiny settlement on a tiny island.  No roads here just a few sandy tracks serviced by(t)rusty Land Rover taxis.  What a magical place but unfortunately, there was no room for us in the marina.  The friendly port police let us tie up on the ferry dock for a few hours so we had a quick look around…..but could have easily stayed longer.

Another rip roaring sail around to  Costa Teguise, about halfway down the east coast of Lanzarote.  Anchored in a small harbour but it was a rolly and miserable night as the swell crept in and Bandit did her utmost to stop us from sleeping.  We were off at first light and with winds gusting down off the mountains it was a vigorous sail to Rubicon marina at the bottom of the island.  We had gusts of 30knots at times so pleased we had reefed the main, but we seemed to be constantly reefing the genoa – out, in, out in….but made fast progress.

Great to get into a marina and have internet (to update blog), supermarkets (fresh food) and catch up with fellow cruisers….including a good few Kiwis.
Lanzarote looked intriguing from the sea so we hired a car to explore the interior.  What a place!  With recent (1800s) volcanic activity the entire island is a pockmarked lunar-like landscape – piles of red and black scoria, amazing rock formations and of course dozens of craters and volcanic peaks.


We stopped at a winery, fascinated to see hardy vines growing in the scoria surrounded by rocks.  We learnt that the vines are planted in volcanic ash and receive enough moisture from overnight dew to survive.  Yields are low but the wines we tried were simply delicious.
In the very north of the island is Mirador del Rio – an amazing spot sculpted into the rock by local artist Cezar Manrique, who is responsible for much of the astonishing architecture on the island.  Mirador sits at the top of a sheer 300m bluff and its huge windows overlook Graciosa, providing stunning views.  Carved into the volcanic rock in a sympathetic way, the spot is not visible from Graciosa – we had sailed right underneath it and not seen it!


Intrigued by this Cezar Manrique we simply had to visit his house which is these days a museum and monument to his vision.  It is truly amazing – all carved into the rock and totally in keeping with the landscape, it includes water features, rooms with amazing picture windows and some fairly astonishing architecture.  Manrique’s touch is visible throughout Lanzarote. 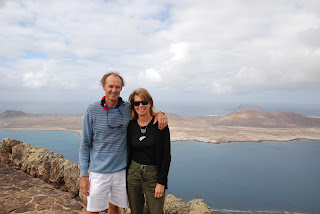 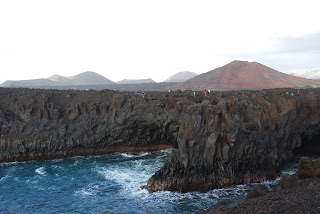 The west coast is reminiscent of Ireland’s rugged west coast – and with a big Atlantic swell running in it made for spectacular viewing.
Naturally we avoided the horrid holiday resorts along the east coast – we accidentally drove into one and, as soon as we saw the Irish pubs and English breakfast signs out, realised our mistake and got out of there fast.  Luckily for us, the swarms of holidaying English and German tend not to leave their resorts leaving the rest of the island free for us to explore!
Posted by Brenda Webb and David Morgan at 18:01 3 comments:

The Atlantic swell meant we couldn’t risk going into Rabat – our preferred destination.  The river entrance and sandbars mean it’s only safe to enter if the swell is less than two metres – we were getting three to four and it was predicted to increase so we kept heading down the coast to Mohammedia.  There was one free space on the floating pontoon in one of the filthiest harbours we’ve been into ever and we were surrounded by scruffy Moroccan fishing boats and even scruffier Morrocan fishermen!  Within minutes of docking we had a parade of officials visit us – customs/immigrations/port police - all incredibly friendly and keen to mention they knew New Zealand had won the World Cup. Luckily we had some All Black souvenirs to give them. Formalities completed and shore leave passes issued we set off to explore Mohammedia – an interesting enough, if small, town. 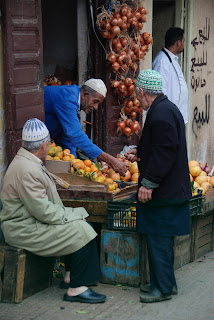 Next day we caught the highly efficient train to Rabat where we spent the entire day exploring the medinas in both Rabat and neighbouring Sale, across the river.  Time stands still in these market places that have existed since ancient times.  The produce on sale was astounding including fragrant spices, aromatic fresh herbs, freshly dug and picked vegetables and fruit and – to my horror – freshly dressed chicken…killed to order.  I had to run past that stall but the squawking from the unlucky bird followed me! 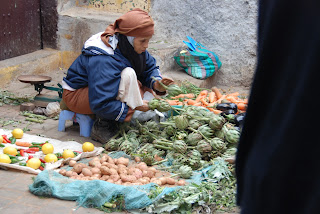 Waiting for the right winds meant we had four nights in Mohammedia and over that time a handful of cruisers came in, including a boatload of friendly Germans who rafted next to us.  They were on a tight schedule and told us they’d be leaving Monday at 3pm.  In true Germanic style, they let lines go on the dot only to return half an hour later with a fouled prop.  Their frustration mounted as the rope proved impossible to cut – and we felt incredibly sorry for the skipper forced to snorkel in the fetid waters.  Help came in the form of Czech sailors who had a diver and compressor on board and, at 8pm, the rope was finally cut free and the yacht left.
After filling with cheap diesel we left on Tuesday morning to find the wind Gods smiling.
We had a fantastic sail to Graciosa, the northernmost and smallest Canary Island, averaging six knots and catching a good tuna en route.  Didn’t start the engine once.  It doesn’t get much better than this!

Posted by Brenda Webb and David Morgan at 20:19 2 comments:

Here we are back in Gibraltar – five years to the day we bought Bandit here in 2006!  We only meant to be here for a few days but, as usual, thanks to delays in spare parts arriving and the weather (six metre swells in the Atlantic yesterday)….we are still here.  A few Kiwi boats left yesterday – Haereroa from Fiordland and Loose Cannon from Nelson – but we opted to wait until the swells in the Atlantic dropped to a more reasonable level.

Another incentive is that son Sam is here – he is chef on a 56m motoryacht that left Livorno on Wednesday but struck bad weather and were forced to shelter in Alicante (good timing for the start of the Volvo race Sam!).  Their hard luck story was the baby grand piano…bolted to the floor broke loose and caused a bit of damage.  Oh well….if you have these toys on board I guess you have to live with the consequences.
We’re not fans of Gibraltar.  Having spent a winter here in 2006/2007 we swore we would never return.  But the lure was the fantastic English supermarket with its ready meals (for those rough nights), Christmas treats including Christmas cake, pudding and mince pies and of course the duty free booze!


Hope to leave as soon as the swell dies and head for Rabat in Morocco and then to the Canary Islands to catch up with the rest of the Kiwi boats crossing the Atlantic this year.
Posted by Brenda Webb and David Morgan at 12:17 1 comment: