Not far from Havre de Grace, where Bandit is moored, is Pennsylvania Dutch Country, home to the intriguing Amish people.  Persecuted in their native Switzerland the Amish emigrated to the US in the early 1800s.  Lancaster County in Pennsylvania has become one of the largest Amish communities in the US.  Given it was only an hour’s drive from the marina, which kindly let us use their “loaner” car – we visited.  Wanting to avoid the hugely touristy Amish areas around Lancaster itself we took to the rural back roads and it was beautiful country.  Gently rolling green hills dotted with gorgeous trees just starting to turn colour while the main crop was corn with tobacco second.   Much of it is farmed by Amish people. 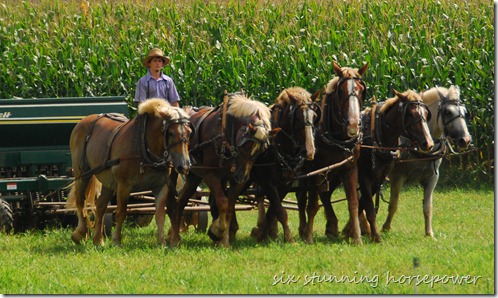 We stumbled across some astonishing sights, none more so than the young Amish lad drilling a field using six heavy horses abreast.  Neither of us had seen this before – we’d seen work horses in tandem pairs but never six abreast.   A magnificent sight.  Further up the road we passed an Amish man with a horse drawn cart load of tobacco.  We had to take this shot through the car window so it’s a bit fuzzy.  Amish resent having their photos taken so we had to be a little subtle about it.  We saw lots of Amish women toiling in the fields in the hot sun but really couldn’t stop to photograph them – it was a bit too obvious.  All our pix were taken with a long lens and despite that, we got some glares. 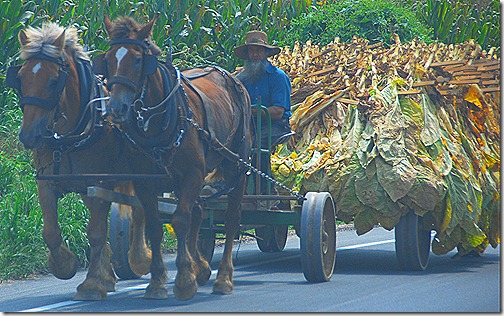 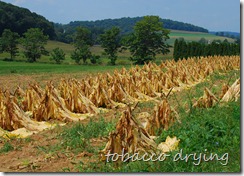 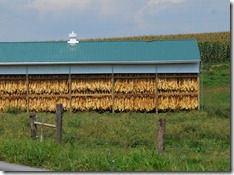 The Amish houses are easy to spot – they’re the ones with the distinctive blue, white, grey and black laundry hanging out on old fashioned washing lines.  Every house seemed to have plenty. 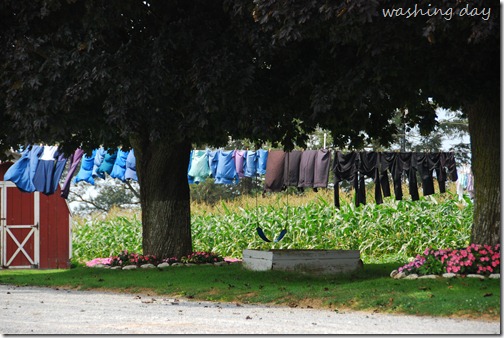 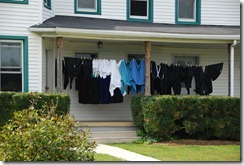 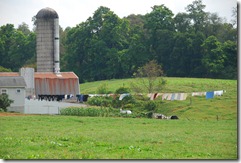 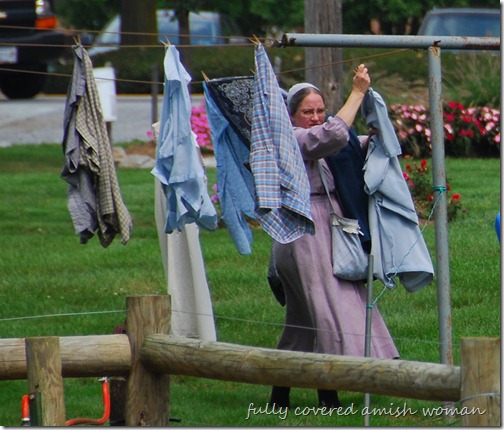 While every Amish community is slightly different in general Amish people shun modern technology and mains electricity and live a very simple life centered around family and farm.  Given the average couple have seven children it’s easy to see why they are one of the world’s fastest growing population.  In-breeding (they are only allowed to marry from within) has caused genetic problems and Amish are prone to dwarfism.  Amish people dress plainly, hence their nickname “The Plain People” and women are covered from head to toe – they even wear thick socks and boots to cover their ankles (and it’s stinking hot and humid over here right now!).  Men wear black trousers, braces, wide brimmed hats but appeared to wear short sleeves.  They have some interesting facial growth and hairstyles. 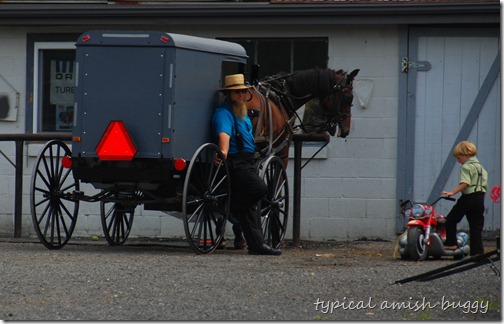 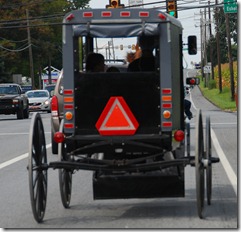 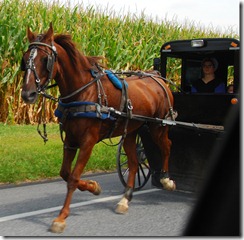 The Amish avoid mixing with non Amish and run their own schools with teaching done by a young woman from within their community.  Sadly, the Amish do not believe that educating past age 13/14 is necessary to equip children for an Amish life – past that age they presumably embark on a life of manual labour and marriage. 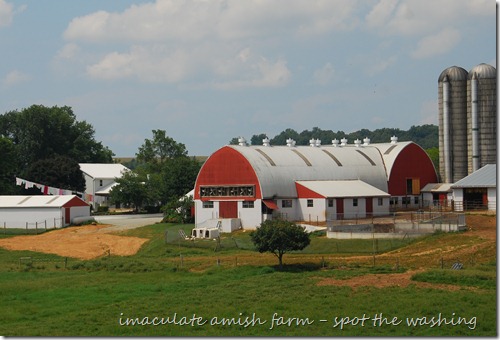 Driving around the rural back roads of Pennsylvania, one thing was obvious – the Amish keep their properties absolutely immaculate.  Many had intensive cropping fields (corn, peas and tobacco) with cattle kept indoors in large barns.  It was an interesting glimpse into an alternative lifestyle.  On the way back to Havre de Grace we passed through the lush green horse country of north Baltimore.  It was truly beautiful with some fairly magnificent properties.  Sightseeing over it was back to work on Bandit! 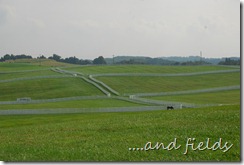 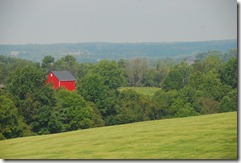 Posted by Brenda Webb and David Morgan at 17:26