Teenage mothers with babies on hips or slung over backs, mangy flea ridden dogs roaming the streets, smiley faced kids waiting to tie up our tender (for a fee!), reggae music thumping from scruffy open air bars, women selling fruit and vegetables on the roadside. Welcome to Palmeira, our first port of call on the island of Sal, a low lying (apart from a few volcanic cones) windswept and barren island in the Cape Verde archipelago. 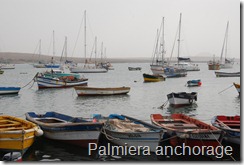 The Cape Verdes lie 325 mils off the African coast and consist of 14 islands – all volcanic including one, Ilha do Fogo, still active. Palmeira, on Sal, is one of three places in the Verdes where yachts can clear in, so it was our first port of call after our six day sail down from the Canary Islands. We dropped anchor at sunset and, after a good night’s sleep, headed off with the necessary documents (passports, boat papers including insurance and ownership). 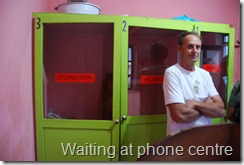 Clearing in is often long and involved and even more difficult when you don’t speak the language – in this case Crioulo which is a spoken only dialect of Portugese. We stumbled by in basic French, filling in numerous pieces of paper, got our passports stamped and then hit a snag – the fee was 10 euro and we only had five. No problem – catch a local taxi to the nearest town, three miles away, where there is a money machine. The taxis are hilarious – mini vans in a state of disrepair with a driver in an equally abysmal state. He spent 10 mins driving around the town, hanging out of his window whistling and yelling trying to drum up more business….giving us a free tour of the backstreets. Then the music was turned up to the max and off we shot, driving through semi desert at high speed in a van that would never pass WOF in New Zealand to the town of Vila de Espargos. 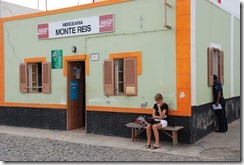 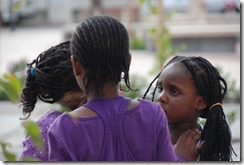 Sunday is Sunday anywhere in the world and there was little happening in this ramshackle town. The streets were deserted and the only sound was the delightful music coming from the church. We got our money and headed back to the van…..and sat there for 10 mins as it filled with immaculately dressed churchgoers clutching bibles and babies. The people are very dark skinned and the women have long hair either plaited Bo Derek style or wrapped in turbans. The children are absolutely gorgeous and not too shy to ask for money from visitors. 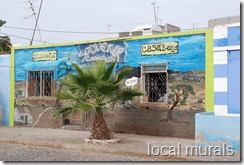 We found and paid the port policeman and wandered the scruffy streets past some amazing buildings, many adorned with colourful murals. Fishermen were busy salting their catch at the water’s edge while the local bar was beginning to fill with an assortment of weird and wonderful, but definitely colourful, looking locals. 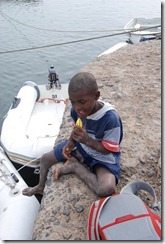 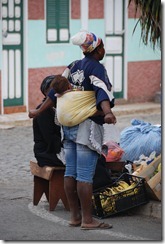 Next day, being Monday, we headed back up to Espargos to get a few supplies and internet.  Buying bananas and papaya from a woman sitting on the kerb became exasperating – she wouldn’t budge on a ridiculously high price and insisted we buy two kilos!  We were probably her best customers of the day!  The town was full of people either sitting or milling around…..not the friendliest people we’ve come across, but with poverty and employment rife who can blame them. 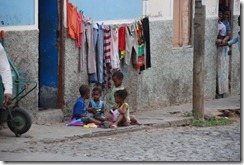 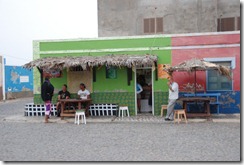 Sal has a population of about 10,000 mostly of mixed African and European descent. It relies heavily on foreign aid as, like all the islands, is poor despite being basically agricultural and producing crops of maize, fruit, sugar cane, beans and potatoes. Tourism is becoming increasingly popular and the south of the island is very tourist orientated with hotels and resorts – many people are attracted to the white sandy beaches and good windsurfing. 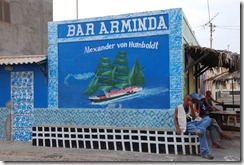 Literacy here is 77% but even so, unemployment and poverty are major problems. Few yachtsman visit Sal – most preferring to go straight to Sao Vicente where there is a marina and far better provisioning. Many of those in Sal are en route to Senegal or the Gambia. We were the only New Zealand boat in the anchorage amongst mostly French, German and Dutch boats. After three days in Palmeira we moved to Baia de Mordeira – a long stretch of white sandy beach and crystal clear water.  Unfortunately it was blowing and we were sick of the haze and fine dust that coast everything and reduces visibility.  So after a windy night we upped anchor at 3am and headed to the next island Sao Nicolau, catching a huge dorado en route! 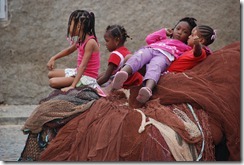 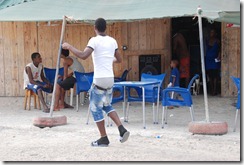 Posted by Brenda Webb and David Morgan at 19:13 1 comment:

Our proposed “few days” in Las Palmas, Gran Canaria, turned into 10. Same old story – waiting for parts, then waiting for weather and then Brenda goes and breaks a tooth!. After leaving Lanzarote we sailed down the east coast of Feurteventura, anchoring overnight in Las Playitis…with a sleepy fishing village on one side of the bay and a huge German resort on the other. You could hear the pilates orders coming over the loudspeaker and drifting out to us! We left on sunrise for the long day sail to Gran Canaria with conditions gradually worsening as we got further south. The winds here tend to accelerate at the bottom of the islands and the swell is confused – we knew all that but conditions were still worse than we expected with 30knot winds and short, sharp swells. Not much fun, but we were thrilled with how Bandit performed and anchored in Las Palmas just on dark. 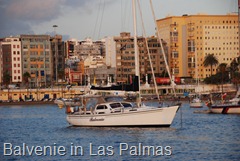 The anchorage was full of cruising boats including two Kiwi boats – Awaroa and Tuatara. The next day Balvenie, a former Picton boat, rocked on in – we’d been chasing them around the Med for several years and finally got to meet Amanda and Mark. The marina was also full of cruising boats preparing for the crossing so it was a very social time with beach parties, dinners/drinks ashore and on various boats….which made our stay there really enjoyable…..but we still just wanted to get going! 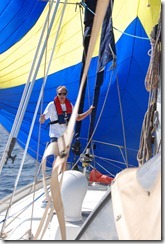 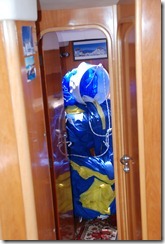 The weather window for a passage to the Cape Verdes looked good for Monday so, after a fantastic farewell dinner on Balvenie and fun night with Mark, Amanda and Tony off Tactical Directions, we were out of there. Earlier plans to visit neighbouring islands of Tenerife and Gomera went out the window - we were anxious to get this next stage of our Atlantic crossing underway. 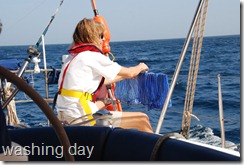 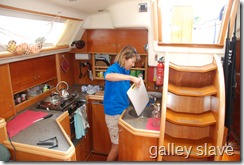 First two days were pretty scruffy – 30 knots of wind with a big swell made for  uncomfortable days and nights – we made up a bed on the saloon floor as it was the only reasonable place to snatch sleep. The only good thing was Bandit’s speed – she rocketed along averaging 7 knots – hitting top speed of 12 at one scary stage! But once the wind eased and the swell dropped we had some fantastic sailing on virtually flat seas – much kinder and far less spillage and swearing involved and we still flew along. 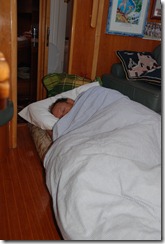 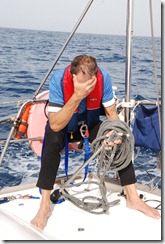 Now, for those who haven’t read our daily blog (www.blog.mailasail.com/yachtbandit) I will relate a story about our new towed generator, the skipper and a fishing line.  By just reading those few words you have probably got the general idea.  The generator is towed behind Bandit on a 20m length of spinning rope……and no, it is not a good idea to put the fishing line out at the same time.  But…we did and the photo shows the aftermath.  What you can’t hear are the swearwords coming out of the skipper’s mouth!!!  Needless to say, from now on Willy the Worm (the generator) does his duty at night and we fish during the day! 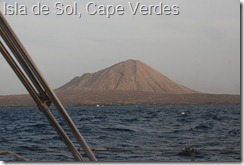 On day five we got the spinnaker up and left it up all night. Naturally, when we came to take it down we had issues (what is it with this damn sail??) and we were just pleased there were no onlookers. We even caught a fish on the last day. We anchored in Palmeira Bay on the island of Sal, poured ourselves a big rum and cooked up delicious mahimahi.

Posted by Brenda Webb and David Morgan at 16:08 3 comments:

Preparing for the Atlantic crossing 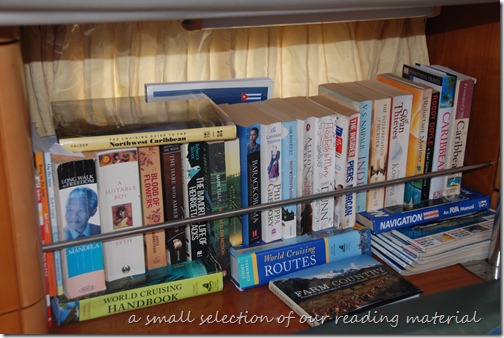 Preparing and provisioning for a three week Atlantic crossing is a mission. In theory (and mentally) we’ve been doing it for five years and are confident Bandit is fully stocked, well equipped and ready to go, but I can’t help having a last minute panic. There just seem to be so many last minute things to do even though we consider ourselves fairly organised. 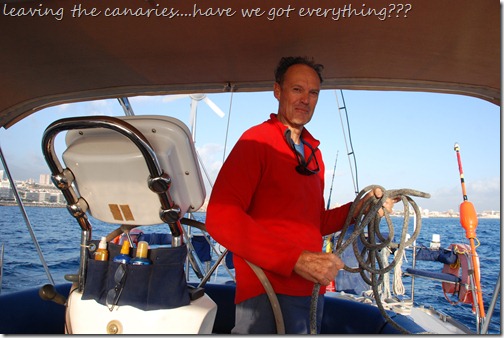 A blue water ocean passage is always a challenge, especially shorthanded, but our shake down passage from Gibraltar to the Canary Islands (via Morocco) brought smiles to our faces. In a stiff breeze Bandit went better and faster than we expected. A solid boat weighing 18 tonnes (and that was before the Turkish rugs, Italian marble ware , Sicilian pottery, Moroccan tagine dishes, 20 kg of Italian pasta and 20 litres of Spanish olive oil went on) she proved she had the legs to cope with the strong wind and big swells. 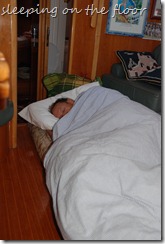 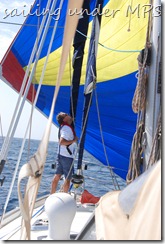 The only aspect we found difficult was adapting to broken sleep…..although our night watches (four hours off/on) were made easy at times with pilot whales and dolphins accompanying us.   For those who know nothing about sailing…..no, we cannot anchor at night, yes will go three weeks (give or take a day or two) without \seeing anything but ocean and no, the Atlantic isn’t a frightening prospect – it’s far safer than driving down State Highway One. 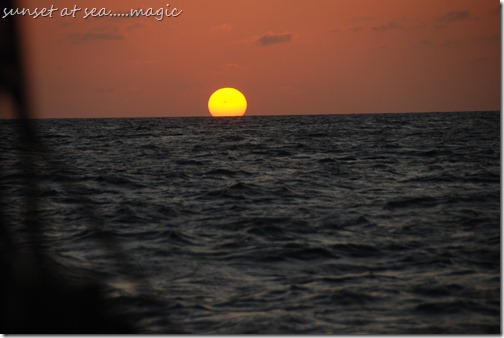 Will we get bored? Strange as it seems – there probably won’t be time. There’s navigating, (David navigates by the stars with a sextant as well as GPS), constant watches, meals to prepare, the boat to keep clean and tidy, emails and blogs to write and of course all those books to read as well as snatching sleep whenever possible. 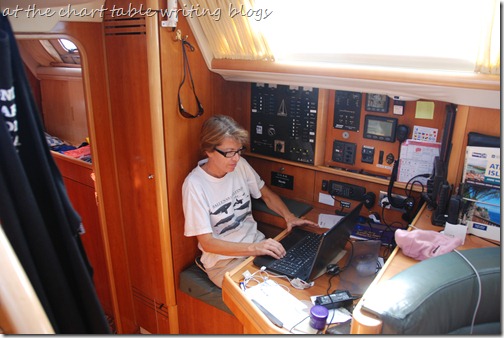 While we’ve done two Atlantic crossings before, we feel complete novices (and a little nervous) going into this one but are looking forward to the challenge. And, once out there on the blue Atlantic with those lazy swells rolling by, the days getting warmer and catching plenty of tuna and mahi-mahi, we’re confident it will be bliss.