Stepping back in time

Now here’s a blast from the past – the Bandit blog is going back to 2007!  That’s the year we set out from Gibraltar on Bandit after buying her the year before. 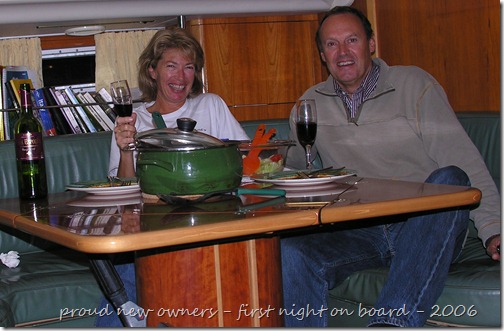 Back in those days we weren’t very internet savvy and certainly didn’t have a blog up and running.  In fact that didn’t happen until our last year in the Med.  Given we’ve spent a fair bit of time at anchor in remote locations the past few months, it’s been a perfect time to get the blog up to date and, in the process, sort out our thousands of photos.  The blog is a great record for us and gives family and friends a chance to see what we’re up to.  If you feel inclined go to the blog list at the left hand side of the page and zoom on down to 2007.  We’ve already updated Majorca, Sardinia, Sicily and Greece and in the next few weeks you’ll see Turkey and more from Greece.

Posted by Brenda Webb and David Morgan at 22:21 1 comment:

The Belize Reef – second largest in the world after Australia’s Great Barrier – stretches for some 200 miles along the Belize coast in the western Caribbean.  Numerous cays (islands, pronounced keys) are dotted along, inside and outside the reef with sandy white beaches, swaying palm trees and atmospheric barefoot beach bars.   After six weeks here we concluded it was one of the most underrated and undiscovered cruising grounds in the world.  Along with cruising buddies Balvenie, we were often the only boats in anchorages. 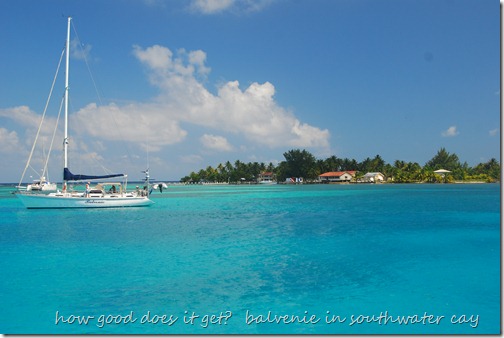 So many cruisers/circumnavigators tend to head from the eastern Caribbean straight through to the Panama Canal which is the most direct and easiest route to the Pacific.  You do put yourself in the corner over this part of the Caribbean and we’ll no doubt have to wait for a good weather window to start heading east later in the season. 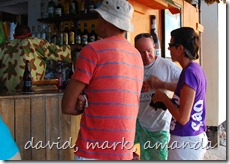 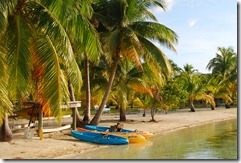 Most cruisers here seem to be American or Canadian who leave their boats in the Rio Dulce for hurricane season and use this beautiful part of the world as their winter cruising ground while it snows back home.  There are a handful of French, German and English cruisers but we haven’t seen another Kiwi or Australian boat yet.  It really is a magical part of the world and so spectacularly deserted. 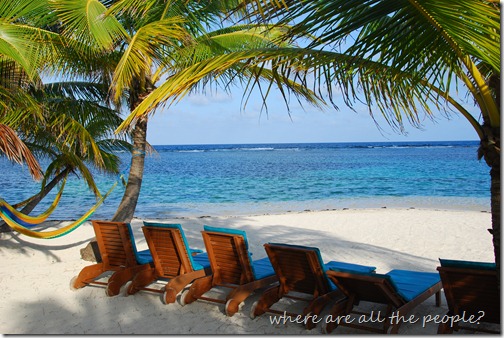 Take Glover’s Reef.  It is one of Belize’s three offshore reefs and consists of several lovely small sandy cays ringed by a huge reef.   There are several resorts on the main cay – all noticeably empty of guests.  The lagoon inside is milky turquoise and dotted with scattered coral heads.  It’s a protected marine reserve (as are many of the cays here) so the snorkelling was wonderful. 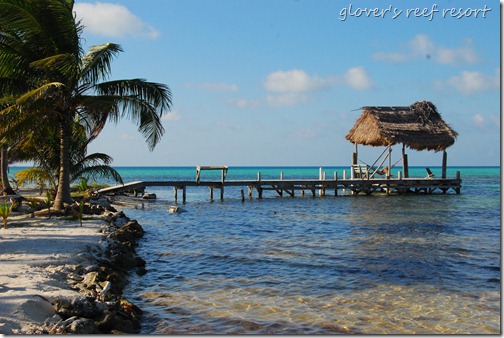 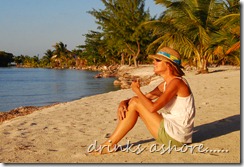 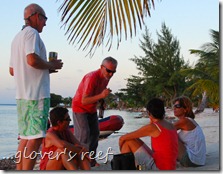 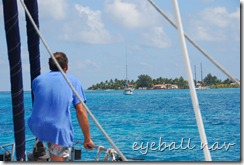 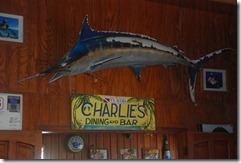 From the time we anchored off spectacular Nicholas Cay in the Sapodilla Cays when we first arrived in Belize in January we’ve been amazed to keep finding perfect anchorage after perfect anchorage.  It’s nothing at all like the crowded eastern Caribbean.  Over this side the people are friendlier, the winds are generally lighter, provisioning is way cheaper and you’re not sharing the anchorage with dozens of other boats. 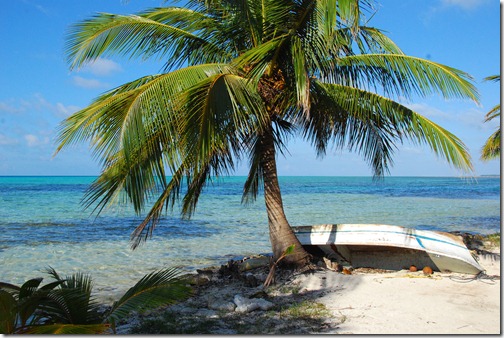 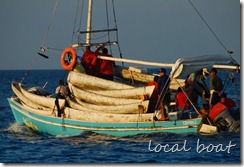 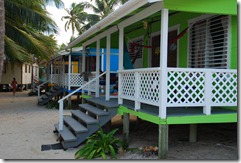 When it came to seafood we were spoilt for choice.  David caught a good sized lobster in shallow water off South Long Cocoa Cay, we hooked a mahimahi while sailing to Glover’s Reef and then two king mackerel a few days later.  As we anchored off one small cay near Dangriga a local chap (“they call me the mayor around here, but you can call me Harry”) paddled out with a bag of lobster tails to trade.  We produced a paperback (he was an avid reader), an old Cuisine magazine for his wife (a keen cook), three packets of biscuits and a 200ml bottle of rum and got four lobster tails.  The next night he returned with fresh lion fish and more lobster.  Paradise! 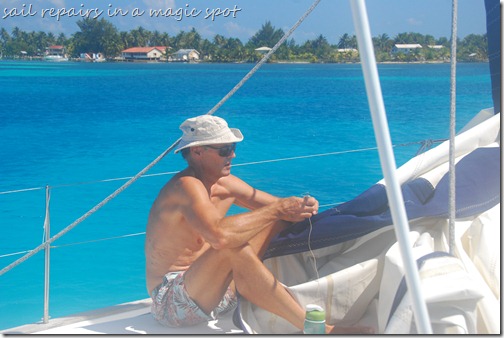 Okay…before you all begin to think about moving here I better point out that two things conspired against us in Belize – the weather and the reefs.   Our month there was dominated by 12 days of overcast or windy conditions during which we had to find shelter and stay put.  Much of Belize is uncharted which calls for eyeball navigation and when it’s cloudy, that’s impossible.   It doesn’t help that Bandit draws just over two metres which makes getting some places in Belize, such as the northern cays, impossible. 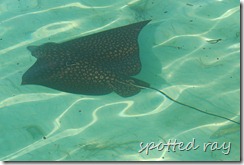 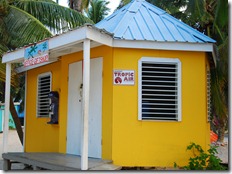 We had a few sticky moments.  The water near the inshore reef was  cloudy making it hard to spot coral heads.  There was often no distinction between 3m, 6m or even 10m.  Near Tobacco Cay we came very close to hitting a sandbar that was uncharted in our guide book.  Luckily we were going very slowly and hit reverse quickly, but saw 2.1m on the depth gauge before we did.  The next day we saw a French yacht run hard aground on the spot. 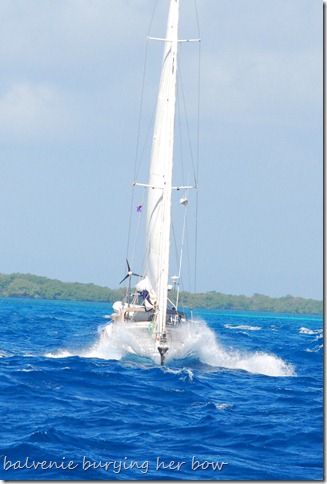 Getting in and out through the narrow passes in the outer reef with a swell running was also heart in mouth stuff – as we found out heading out to Glover’s Reef. As I was taking photos of Balvenie, who was behind us, suddenly Bandit took a huge wet one as well! 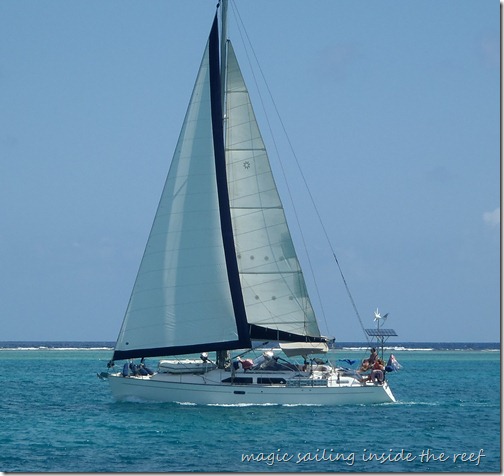 We did have some wonderful sailing inside the outer reef.  With trade winds blowing at a steady 15 knots and flat seas we could race along on a beam reach – magic.  But it was scary given the water was only 3m. 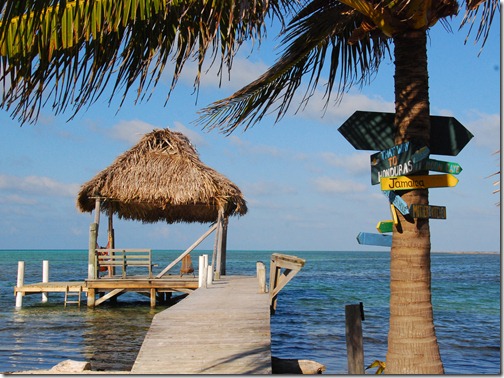 Belize gets affected by cold fronts that develop over the US.  The worst such norther we saw brought 30 knots of wind with it.  We hid out behind Robinson Cay near Belize City but the system blew through overnight and we woke to clear skies and gentle breezes. 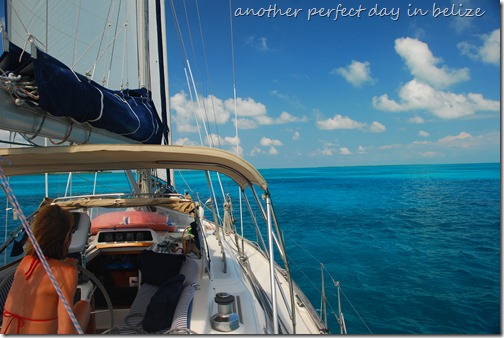 Time to head to Lighthouse Reef which had been the focus of our entire trip here.  Having seen Jacques Cousteau’s documentary about the Blue Hole we decided we couldn’t miss it…but, thanks to weather and that damned shallow ground we did.  The wind just didn’t play ball and given the anchorage was only a tad over 2m and we’d had a scary time in Turneffe Reef the night before with just 40cm under the keel, we decided to head to Mexico instead. 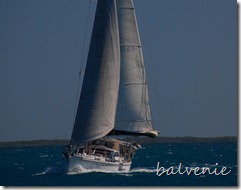 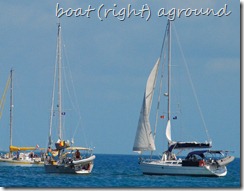 Unfortunately, not being familiar with local weather patterns in this area meant we were often running for cover from systems that didn’t eventuate or getting caught in winds that were not forecast. Oh well…that’s all behind us now and next stop is margaritas in Mexico.

Posted by Brenda Webb and David Morgan at 17:03 2 comments: