Back in the magnificent Mediterranean we’d often meet cruisers who had already sailed the Pacific.  “Just wait until you get there,” they’d say.  “It’s magic”.  After a few months in the Pacific we’ve realised that paradise really is on our own back doorstep.  The Tuamoto atolls we’ve visited have been absolutely exquisite.  What they lack in shops (there are few), bars and restaurants (ditto) and cafes (forget it) they more than make up for in remoteness, tranquility and sheer beauty.   Hopefully, their remoteness means they will always stay this way.  And because they are so difficult to get to, it’s us lucky cruising sailors that really get to enjoy them at our leisure. 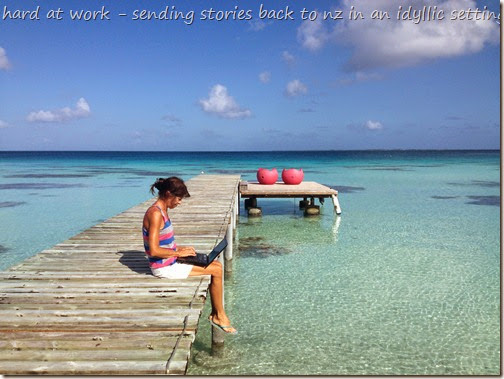 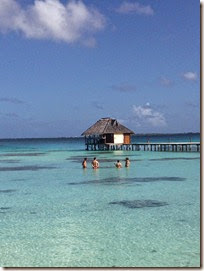 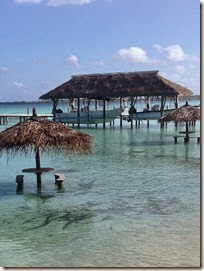 We arrived in Fakarava amidst squalls – the sail across from Kauehi had been fine but as we approached the northern pass we could see black clouds building.  The pass is wide and it was, again, a straightforward entry with the ingoing tide giving us a sleigh ride.  Any salt splashes were soon washed away with a brief deluge as the squall hit before the bright sunshine returned – a typical day in the Tuamotos.  We anchored off the village of Rotoava for a night – enough time to buy baguettes and restock with a few fresh supplies.  With story deadlines looming I had to find internet which had been difficult.   In Fakarava we found the stunning waterfront Havaki Hotel and I sat on the dock and sent my story and photos – tough place to earn a living!  Afterwards we headed down the lagoon to find our very own piece of paradise with not another boat in sight – heaven. 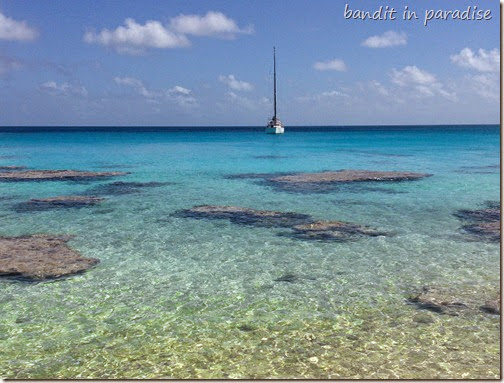 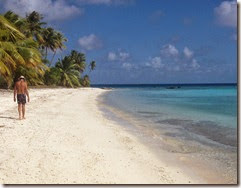 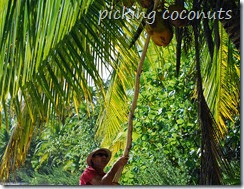 We spent three days and nights in idyllic remote anchorages, working on Bandit in the mornings (it’s true, the definition of cruising after all is fixing the boat in exotic locations) and enjoying our surroundings in the afternoons.  The snorkelling in the crystal clear water was lovely as were the beach walks.   The entire coast of Fakarava is dotted with blissful deserted spots like this. 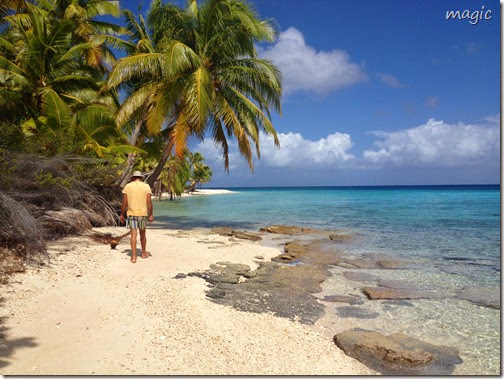 Then we moved on to the bottom of the atoll to a heavenly spot called Harifa.  Because it is so heavenly there were other boats there but it is a big anchorage and can absorb them.  Most of the cruisers we knew so, once again, it was nice to socialise.  Best of all there was a waterfront restaurant which had just opened.  You had to preorder so the food could be caught!.  The friendly hostess Liza served the best poisson cru we’d ever tasted …a huge bowl for $10 made using freshly squeezed coconut and limes. 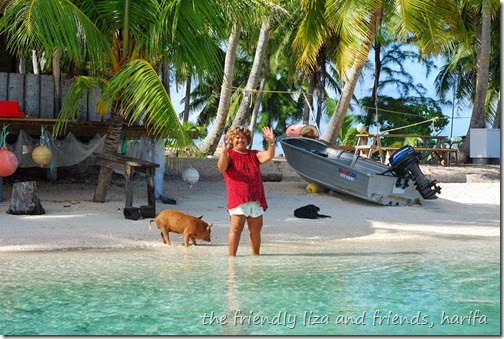 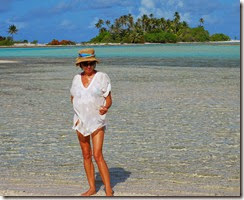 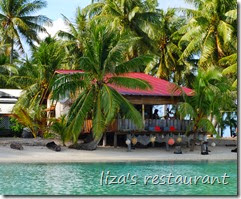 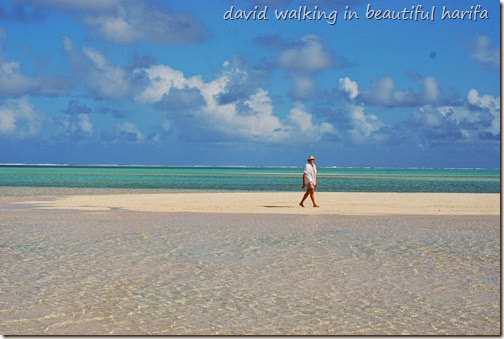 Snorkelling was beckoning so we moved to Tetamanu at the southern pass which has a reputation for world class diving and snorkelling. The pass is notorious for sharks, friendly ones of course.  As we anchored Bandit was surrounded by small reef sharks.  The water was crystal clear and as we watched fascinated a massive black shape loomed out of the depths.  It was definitely not a friendly reef shark.  We later found out it was a 17ft tiger shark (identified by divers who went looking for and found it).  Anyone who knows anything about sharks will know the tiger is number two on the “dangerous” list after the great white.  The tiger was attracted by whale meat – we soon realised we’d anchored close to where locals were cutting up a washed up carcass.  Needless to say, we moved further away. 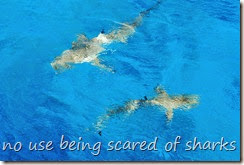 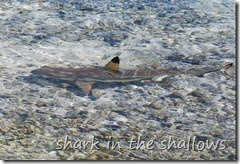 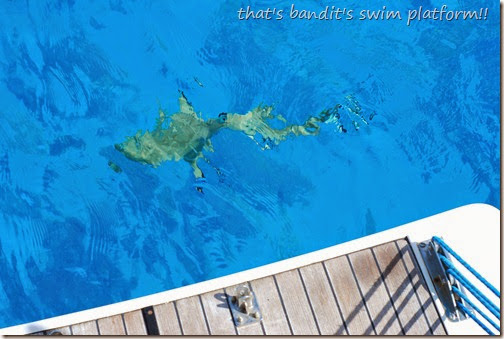 Seeing the tiger made us a little wary about snorkelling but the dive school assured us the sharks were well fed…so off we went.  We drift snorkelled through the pass at slack tide – keeping a firm grip of the tender so we could leap into it if we saw anything untoward.  The snorkel was fantastic – there were so many sharks you couldn’t count them and after a while you (kind of) ignored them…they certainly ignored us.  The coral was spectacular and the marine life was astonishing- quite the best snorkelling we’ve ever had.   David also did a dive with friends from True Blue and came back ecstatic – once again, seeing dozens of sharks was the highlight. 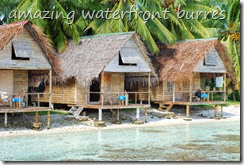 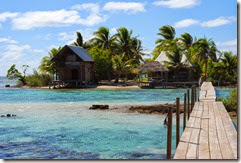 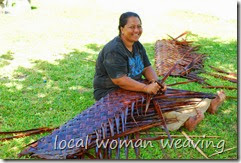 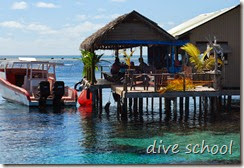 The south pass area is a very remote part of Fakarava.   The village of Tetamanu, which years ago was a thriving town, is abandoned and only a few locals live there running the dive shop and resort.  What a magic spot for a diving/snorkelling holiday with traditional burres right on the waterfront…you can dive from the deck!  It really was a very special place and it was hard to drag ourselves away but we had a deadline in Papeete so with much reluctance we upped anchor and headed away.  With winds forecast to be squally we headed up to Amse Anyot in Toau Atoll to sit out the blow.  Toau was a wonderful stopover and the friendly Valentina (Liza’s sister) made us very welcome and was delighted to receive some goodies from the Bandit lockers.   We dined in fine style on fresh lobster and left with more in the freezer and a bagful of fine pearls. 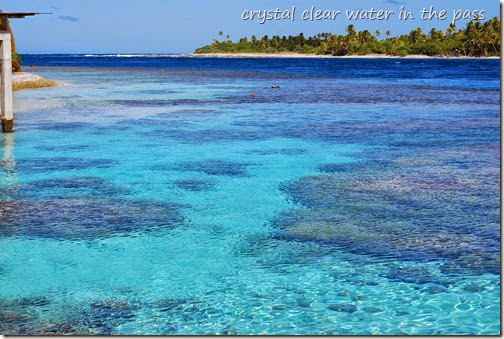 Posted by Brenda Webb and David Morgan at 20:29