Cuba was a country we’d both always had a hankering to visit.  We’d heard wonderful stories from fellow travellers and couldn’t wait to get there ourselves.  In hindsight it may have been easier to fly in to this complex communist country rather than come by cruising yacht! 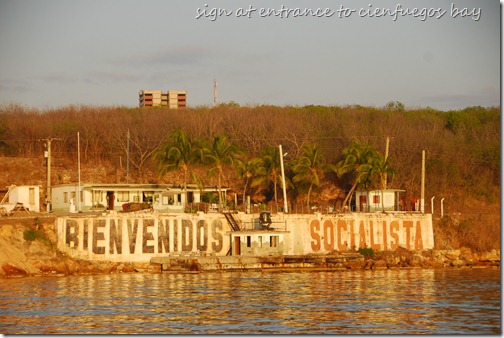 We’d heard entering Cuba could be difficult for yachts so made our official entry at what was considered a “good” port, Cienfuegos on the south coast.  We’d already been in Cuban waters for a week so had managed to eat our way through our fresh Mexican produce, as authorities have been known to confiscate it.  We went onto the official dock at 9am where uniformed officials were waiting for us. They took our passports and told us to wait on board for the raft of officials who would visit. We waited….and waited…and waited. 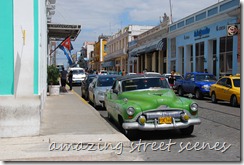 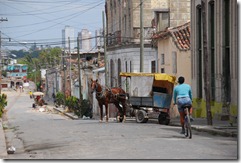 At 11am apologetic and very friendly health and agriculture officials turned up and thoroughly checked all our food supplies.  I’d washed fruit and veges in disinfectant and bagged them which seemed to impress however what didn’t impress was a tin of peaches bought in Spain with a 2010 expiry date. Who on earth looks at expiry dates? Cuban officials that’s who! The entire conversation was in Spanish and we finally understood they wouldn’t confiscate, but warned us not to eat them.  We ate them the next day with no ill affect. 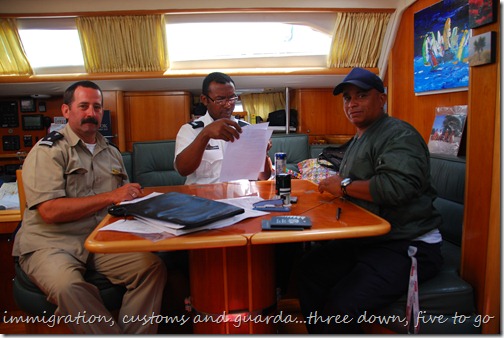 Next up was customs, immigration and guarda all of whom had many questions to ask and plenty of forms to fill in.   It must have been thirsty work because after an hour they asked if they could have a cold beer. Then along came the dogs – two lively Spaniels and their handlers.  The dogs were let loose to sniff everywhere, one searching for drugs, the other explosives. 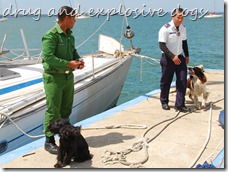 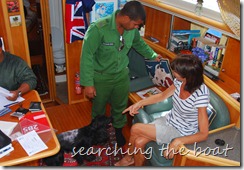 Finally…..after more than eight hours…..we were given the green light.  Well almost – our passports were returned and we were told our visas were ready for us to pick up at the immigration office.  Only problem we couldn’t leave the boat until we had our visas!  Luckily the obliging dock master offered to go and get them for us.  This was our first taste of the incredible red tape the Castro regime lays down for cruising yachts and it’s unlike any other country we have visited.  We had to check in and out of every port we visited.  Have to say though, officials were always friendly and thoroughly professional. 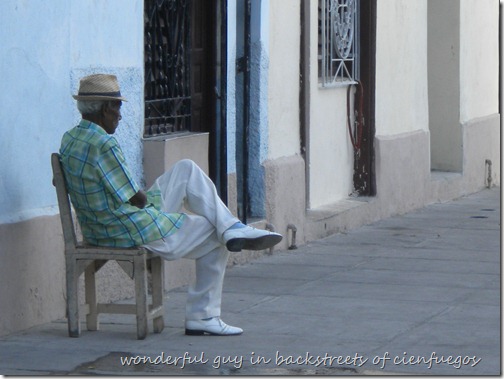 Officially cleared in we set off to explore, walking into Cienfuegos along the waterfront soaking up the amazing sights.  It was just as we’d imagined – neoclassical mansions, old American cars, horses and carts and the wonderful sound of Cuban music wafting from bars.  After a few hours strolling the streets we caught a cycle rickshaw (bicitaxi) back to Bandit – discovering later that the $2 the well muscled driver charged us was the equivalent of a day’s wages.  No wonder he smiled!  From then on we took our own bikes. 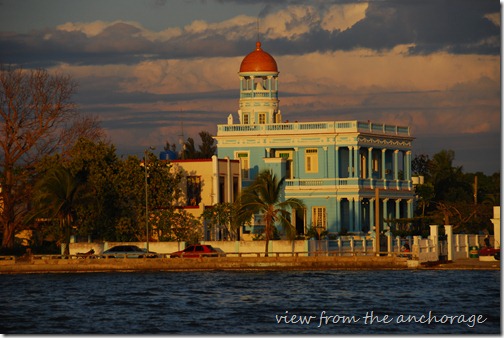 Next day we moved out into the anchorage and went ashore with our trusty bikes for a proper exploration.   We headed out through seedy backstreets to the Cemeterio La Reina – a rather rundown cemetery with some amazing marble statues and graves of Spanish soldiers who died during the wars of independence.  What horrified us in this area were the emaciated, worm infested and injured horses running loose on wasteland.  It’s illegal to slaughter horses in Cuba so, sadly, they just leave them to die.  It was heart-breaking. 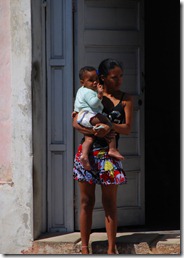 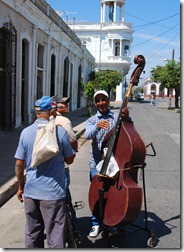 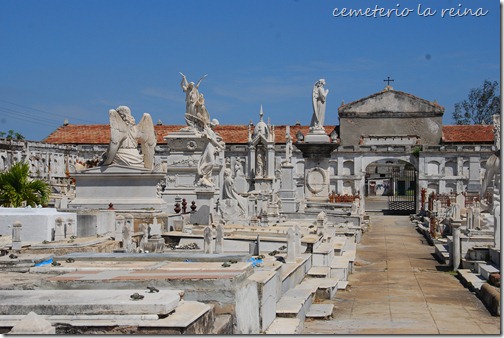 Cuba has two currencies – the peso or moneda nacional, which is used by locals, and the convertible peso (CUC) or hard currency – mainly used by tourists.  Cubans like CUCS as they have more buying power (hence our taxi driver asking for CUCs rather than pesos).  One CUC equals 24 pesos and is tagged to the US $1.  If you use pesos then everything is much cheaper.  Once we figured this out we ate at peso restaurants for less than $1, bought ice cream for a few cents and bought provisions for next to nothing. 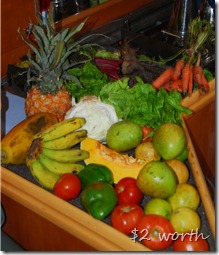 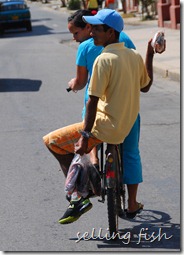 We quickly learned that life in Cuba is vastly different to anywhere else we have been.  Bureaucracy rules and Cubans have little freedom – they are not allowed satellite television or internet.  There are a handful of internet cafes for tourists.  Newspapers are government owned as are radio and television so Cubans are fed a daily diet of government propaganda.  There is no free press…something the journalist in me hates.  It’s hard to dig deep because Cubans are not allowed to criticise their government. 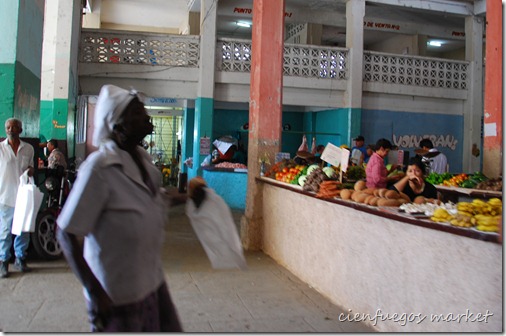 Most industry (fishing, mining, hotels, buses  restaurants and marinas etc.) is government owned.  Recent deregulation means individuals can now run a small business (eg taxi or Casa Particular – room for rent in private house) but they cannot employ people except relatives.  They also must pay huge licence fees and taxes – all part of Fidel’s great plan to avoid capitalism.  It seems to be working as we never saw any signs of overt wealth except in Havana’s affluent diplomatic areas.  In fact we got the distinct impression that many Cubans are poor despite being provided with housing, a monthly ration of basic provisions and free education and healthcare. 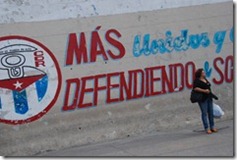 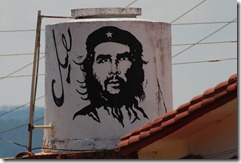 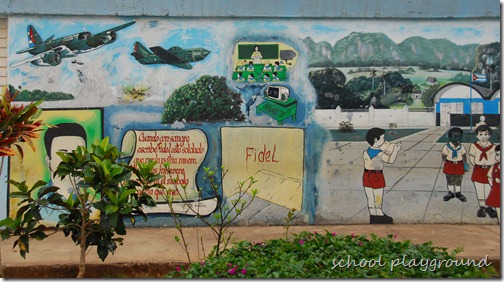 It’s hard to believe the revolution happened more than 50 years ago.  Favoured sons Che and Fidel feature on t-shirts, walls, water tanks and even school playgrounds feature revolution murals.  The revolution certainly rid Cuba of the brutal and opulent Batista regime and the Castro government’s vision has since addressed issues of illiteracy, health and housing…but it’s still nowhere near perfect.  Having said that – it’s a lot better than many other central American or Caribbean countries  we have seen. 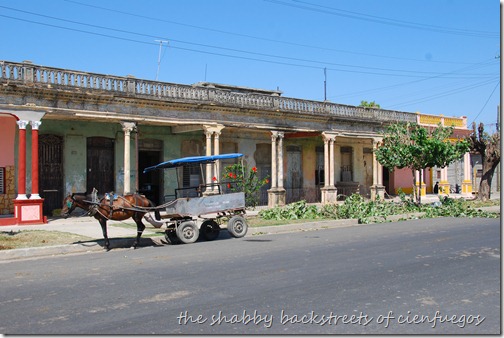 What struck us most was how happy and friendly the people are – some of the nicest and most helpful we’ve met.  We never felt unsafe  and never heard of any crime.  Cubans are well dressed, polite and many are well educated but few we met had ambitions.  We met a med student in his final year of study who, as a fully qualified doctor, will earn $60 a month.  When we asked whether he had plans to travel overseas and earn a salary more reflective of his abilities and training he replied that his loyalty was to the government that had educated him and his fellow countrymen.  An admirable attitude indeed. 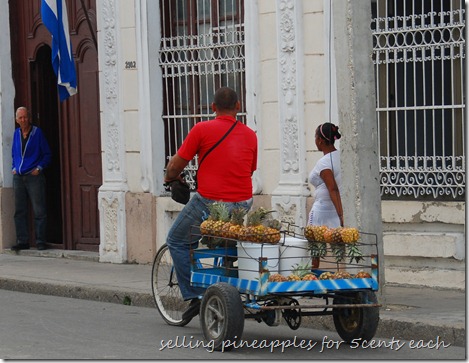 We spoke to as many people as our Spanish would allow and got the overall impression that Cubans are content although a few pointed out that “life in Cuba is hard”.  Those able to earn CUCs ( usually in the tourist industry) seem far better off than those earning pesos.  Cubans have few of the things that we in the western world take for granted – a reasonable property with a garden, a nice car and even basic household goods such as a washing machine etc.  Their life appears simple whether it’s making a few pesos selling pineapples, driving a taxi or running a Casa Particular.  Maybe they’ve got it right. 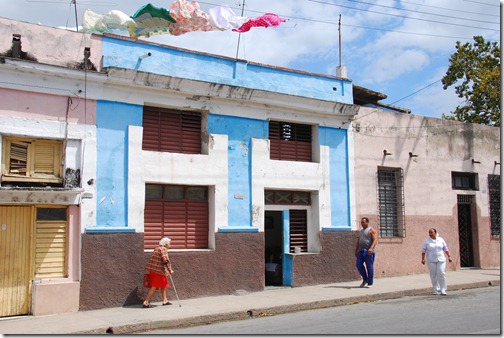 Posted by Brenda Webb and David Morgan at 17:00