Crayfish and calm waters in Cuba

Our arrival in Cuban waters in early March, after a fairly lively two day/night sail across from Mexico, couldn’t have been better.  We dropped anchor in lovely Isla Rosaria in the southern archipelago, went for a snorkel and, in about two metres of water, caught two good crayfish. 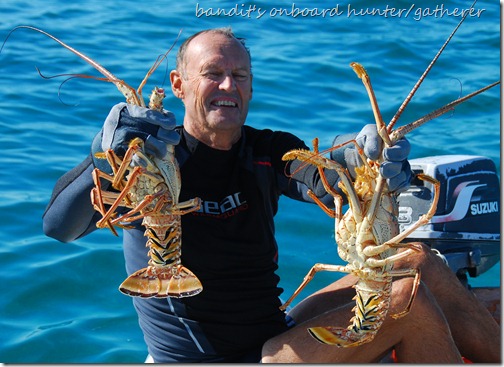 We were stunned to see the crayfish in such shallow water and even more surprised at how big they were – one tail easily fed the two of us.  But before dinner we needed to celebrate our arrival in Cuba and what better way than with a classic Cuban mojito – rum, soda, mint leaves, a dash of sugar and lime – divine! 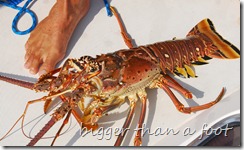 Next day fellow cruisers Andy and Clare on Eye Candy, who we first met in the Greek Islands in 2008, arrived in the bay from Cienfuegos so we had a good catch up with them.  They were headed for the Cayman Islands then Mexico before heading back up to the East Coast of the States where we will no doubt catch up with them again. 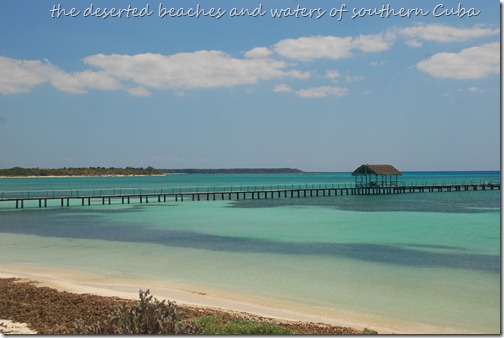 Rosaria was a lovely spot to spend a few days and we enjoyed being at anchor behind the reef, snorkelling, doing boat jobs and sewing a new flag.  Yes…the NZ flag.  Next time you see one look closely at the Union Jack and you will get some idea of just how difficult a project it’s been.  It’s involved a designer, pattern maker, dressmaker and lots and lots of patience.  But it looks fantastic! 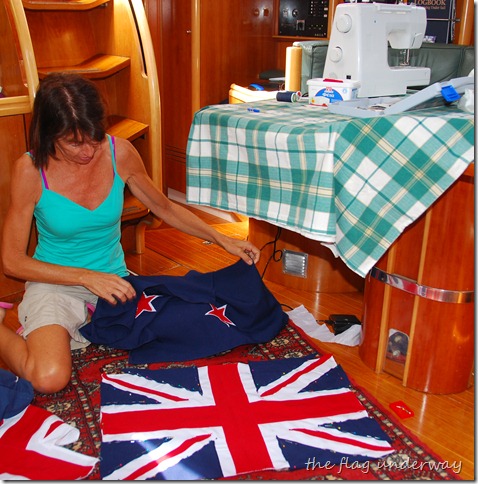 While in Isla Rosaria we were visited by a couple of very friendly Cuban fishermen who had crayfish they wanted to trade.  We gave them a length of rope for their horse, a fresh papaya and some rum and they went away delighted leaving us five big crayfish.  All this was done under cover of darkness as the crayfish here are owned by the government and trading with cruisers is highly illegal.  We later found out that cruisers can be fined for taking crays. 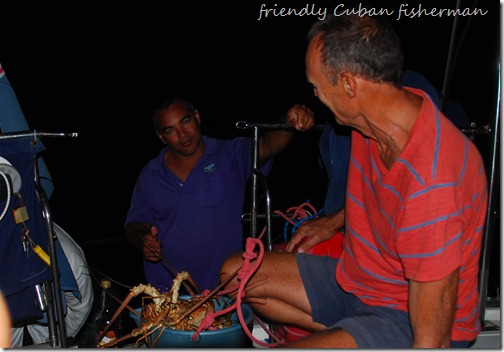 It was hard to drag ourselves away from this little piece of paradise but we needed to officially clear in to Cuba so headed east.  We had a lovely sail inside the reef to Cayo de Dios where we overnighted.  Next day we stopped at Cayo Guana del Este for a snorkel  – crays for dinner again.   Then it was another brisk sail to Cienfuegos where we left Bandit while we did some land travel. 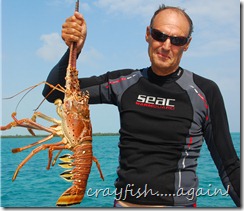 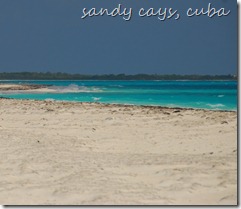 After a week in Cienfuegos we headed back down to the southern cays to Cayo Largo.  This is one of Cuba’s prime beach destinations in the south and it was really lovely but amazingly, quite deserted. 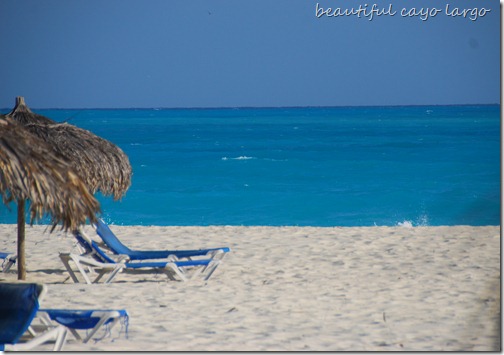 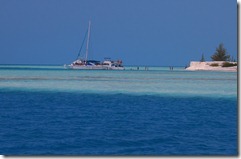 We moved on to Isla Rosaria and snorkelled on the same reef where we’d got crays last time and sure enough…..there were more there!  And no we are not sick of crayfish.  We’ve had them grilled with lime and mint mayonnaise, sauteed with onions, tomatoes and parsley, cold with avocado in a wrap, crayfish pasta, crayfish risotto and crayfish in a Thai red curry sauce.  Our best crayfish story comes from Cayo Matios.   We went for a tender ride along the shore and in about 60cm of water spotted a crayfish out for an afternoon stroll. David grabbed it – the first time he’s ever got a cray without getting wet! 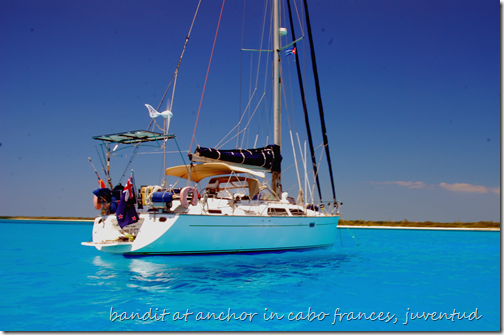 The island of Juventud was our next stop and after a lovely sail with the wind from behind, we dropped anchor in Cabo Frances.  It was absolutely gorgeous – Bombay Sapphire coloured water, fantastic snorkelling and lovely sandy beaches.  We anchored in 5m and a few boat lengths away the seabed fell away to 200m. The drop-off wall is a huge attraction with divers who come from around the world. 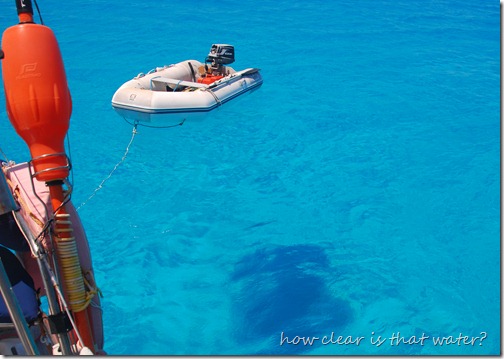 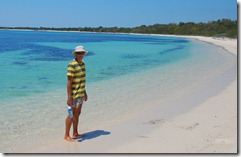 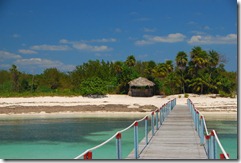 We had only planned on one night here but it was so beautiful we stayed two.   Running perilously low on fresh supplies we headed around to Siguena on the west coast of Juventud to provision.   It was too shallow for us to get into the marina so we anchored off and took the tender ashore to check in with guarda. 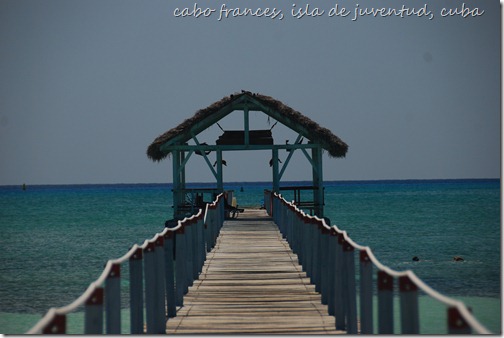 Next morning we took a workers’ bus to the town of Nueva Gerona, 40kms away, and stocked up on fresh fruit and vegetables.  Everything seemed to be “dias pesos” – about 40cents – whether it was a huge pile of tomatoes, mangos or a pineapple.   Nueva Gerona felt like a real working town with not another tourist in sight.  We bought two loaves of crusty bread for 20cents and they were handed over unwrapped but outside were old men selling plastic bags. Enterprising!  We then had a Cuban specialty – a greasy, but delicious cheese and ham toasted sandwich, and a coke, for 50cents. 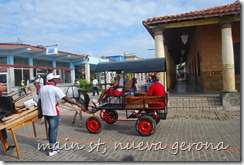 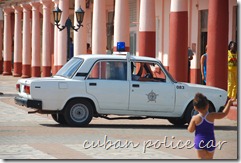 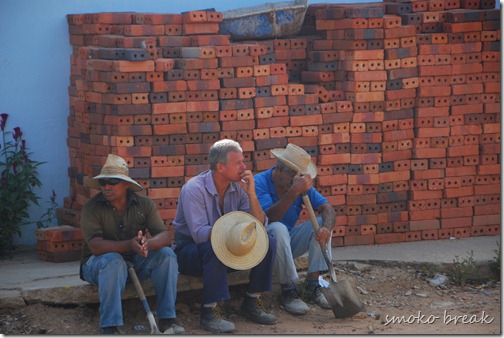 On the outskirts of Nueva Gerona is Presidio Modelo, the amazing prison complex where Fidel Castro was held from 1953 until 1955.  Based on a notorious penitentiary in Illinois, the prison could hold 5000 prisoners at a time.  It was built during the repressive regime of Gerardo Machado.   Each oppressive round prison block held up to 1000 prisoners who were watched by a solitary guard from a tower in the middle. From here he had a clear view to each of the tiny cells, stacked on top of each other around the perimeter of the building. 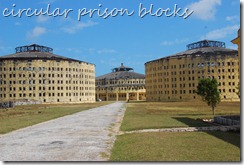 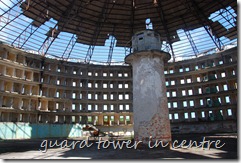 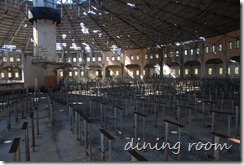 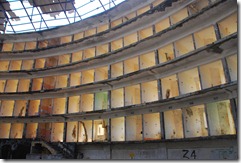 Meals were held in complete silence in the equally oppressive dining room – 3000 prisoners were served at a time. Sadly, the whole complex is completely run down today with anything of value, such as the window’s steel bars, gone.  Even the administration block, built in typical flamboyant Cuban style,  is showing signs of neglect. 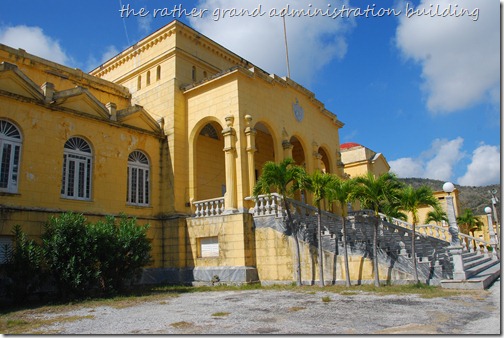 Juventud was an interesting island. In its heyday it was covered with flourishing citrus orchards tended by students who came to study at  government funded colleges. When the Russians pulled out of Cuba after the collapse of the Soviet Union, the supply for citrus dried up and the orchards and schools were abandoned.  Today Juventud is a sleepy backwater with some very primitive agriculture.  We saw oxen pulling ploughs and huge paddocks of potatoes being weeded by hand.  Horses and carts were the most common form of transport. 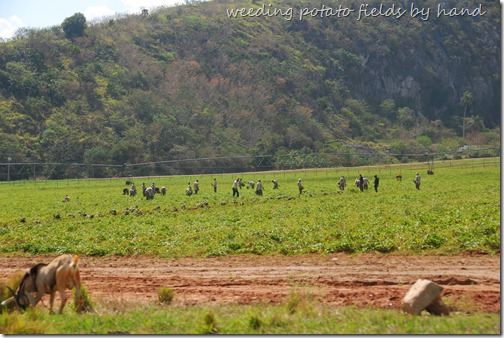 We took a taxi back to Siguena and on arrival asked the guarda for our “despacho” for the next port.  We were astounded when they said they wanted to come out to Bandit, presumably to check for Cuban stowaways. So there we were  with all our fresh supplies and two black booted officials in our tiny tender.  Sadly, one boot found its way onto the bag of fresh tomatoes – tomato pasta for dinner! 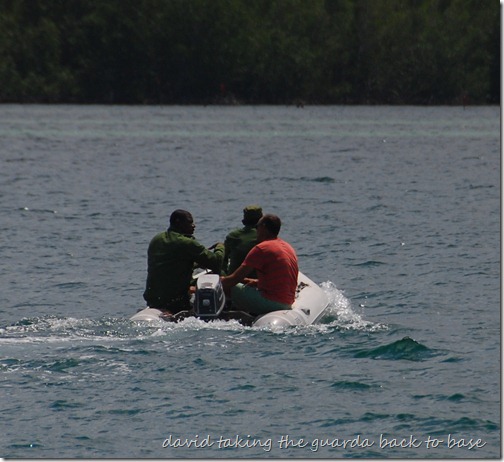 We headed away and had a lovely overnight sail around to Cayo de Lenos where we met up with Kiwi mates Amanda and Mark on Balvenie, who had also done an overnight from Isla Mujares in Mexico.  It was great to catch up again and we sailed together up to Hemingway Marina near Havana.  The north west coast of Cuba proved singularly unexciting with mangrove cay after mangrove cay and none of the spectacularly clear water of the south coast.  These areas are inhabited by alligators so we skipped on swimming and snorkelling and instead prepared ourselves for some city exploration in Havana. 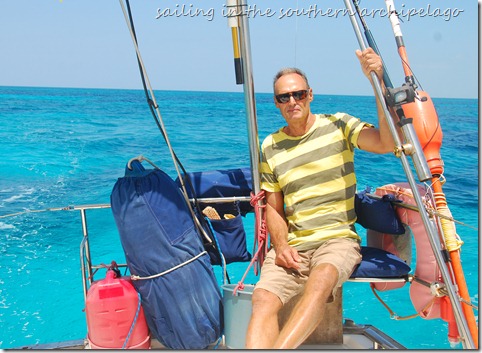 Posted by Brenda Webb and David Morgan at 21:43