We’re getting better at being both patient and philosophical these days.   As I write this we’ve been stuck anchored off Panama City for two weeks…waiting for parts to arrive.  During our eight years of cruising we’ve had endless enforced delays.  We can cope with delays due to weather as they are inevitable and there’s usually a safety element involved but waiting for parts to turn up is immensely frustrating.  Not having a physical address presents all sorts of complications and we’ve chased parcels all around the Mediterranean and Caribbean.  And so it continues in the Pacific. 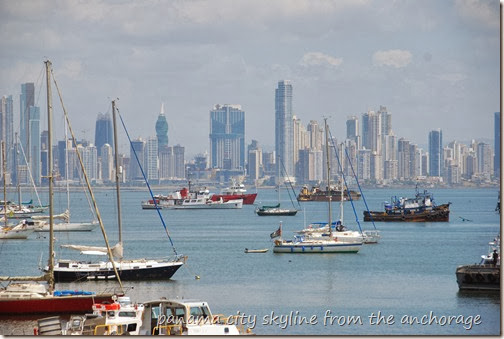 We ordered the parts in early February on express (3-5 day) delivery confident they would arrive well before our Panama Canal transit date of February 20, but that turned out to be way too optimistic.  Transit date came and went and still no parts.  Then just to frustrate us even further, the beginning of March was Carnival in Panama – the biggest celebration of the year when all businesses close and services come to a screeching halt for at least five days – some more.  So much for leaving.  It did mean we could attend the Pacific Puddle Jumpers party at Balboa Yacht Club and do yet more provisioning. 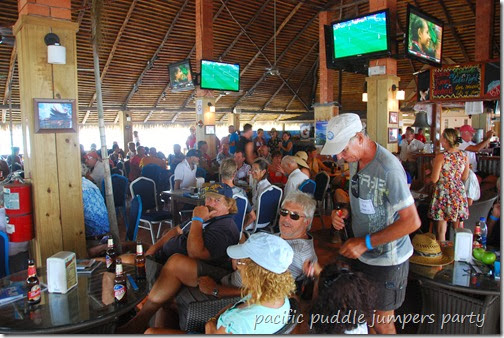 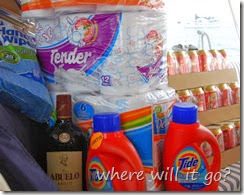 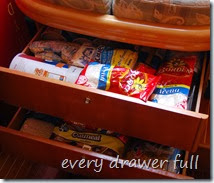 The good thing about the cruising camaraderie is there is always a shoulder to cry on and, usually, someone with a far worse story.  Our Australian friends Peter and Carol on Jack Tar got the short straw this time.  They hit a submerged log during their canal transit and had to haul to replace their shaft seal.   They hadn’t planned on stopping here so Carol was well provisioned with a freezer full.  It’s water cooled so doesn’t work on the hard and finding freezer space in Panama City is difficult.  Our problems suddenly seemed insignificant.  So with Carnival on and post offices and courier companies closed there was nothing to do but join the locals and party. 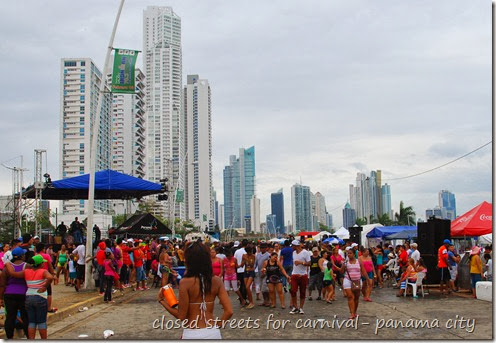 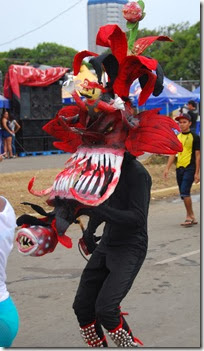 There was lots of flesh on display – we blame the hot climate for such skimpy attire, boy, do these Latin Americans love showing off! 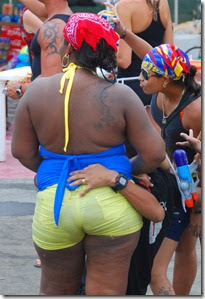 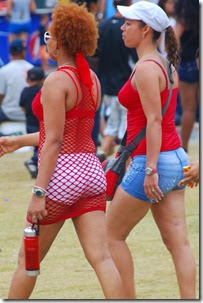 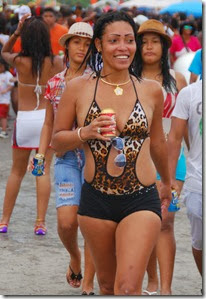 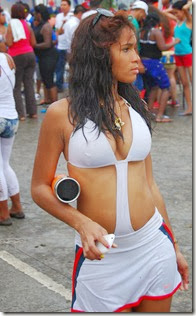 Carnival lasts for five days and nights and from what we could see, mostly involved young Latinos dancing, eating, drinking and having lots of fun.  As it’s stinking hot there were lots of water trucks spraying people with cold water.  One of the dance pits was a seething mass of hot bodies……and lots of beer cans, mud and plenty of security. 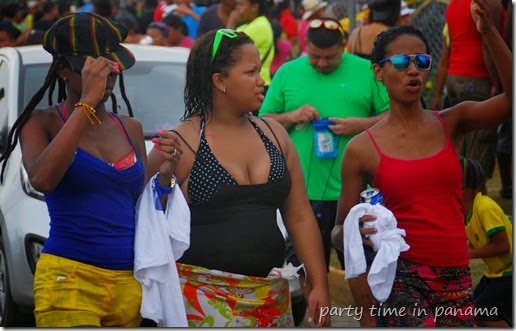 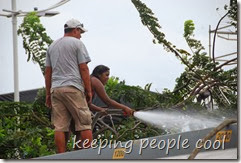 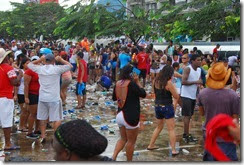 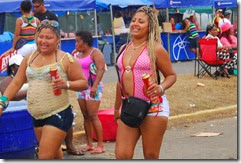 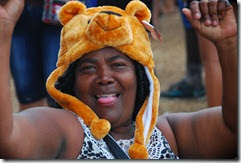 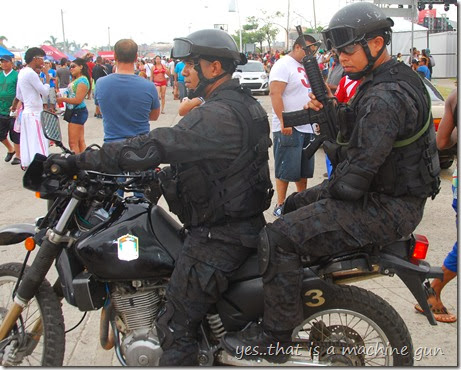 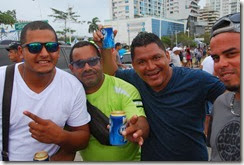 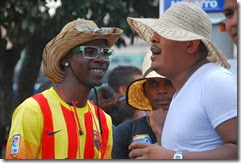 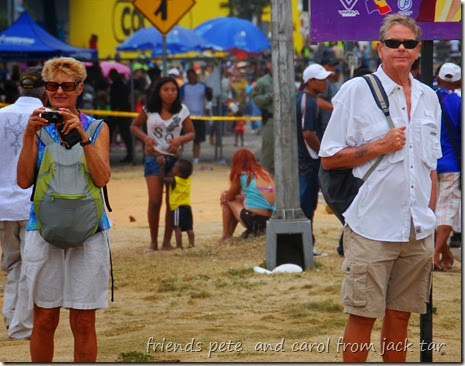 Party time over it was time to get on to the serious business of chasing up our parcels.  After making numerous enquiries and making several trips to the post office on the Panama City side, to no avail, we bit the bullet and took a bus to the aptly named Colon.  I say apt because if the world was named for body parts, Colon is about as low as you can go.  Colon is a hole.  The town itself is seedy, crime is endemic and it has absolutely nothing to recommend it. The Colon post office is in one of the worst areas so we were glad when the taxi dropped us right at the door where we had to dodge a pile of vomit. 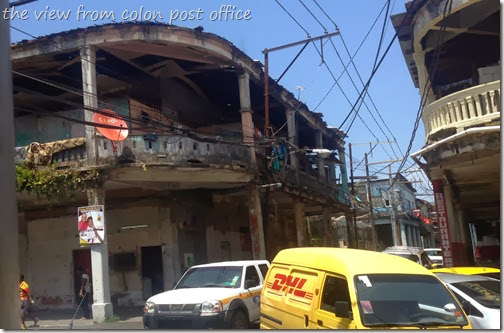 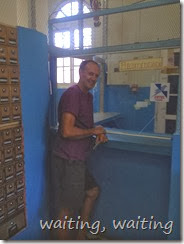 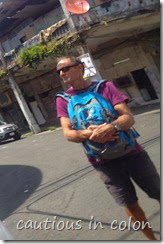 The first woman we dealt with flicked through a sheet of receipts and shook her head – “nada”.  But the eagle eyed skipper had spotted our tracking number (he’d repeated it so many times he’d memorised it) and insisted she go through them again.  Sure enough it was ours.  The relief washed over us but picking up a parcel in these 3rd world countries is not straightforward.  We took the receipt to another window, paid 25c, had it stamped and then took it to another window where we had to show passport and boat papers and fill out endless paperwork.  The parcel was sitting just out of our reach – but we couldn’t touch it until customs arrived to search it and the customs lady was at lunch!!!  We waited for an hour before finally getting our hot little hands on the parcel. 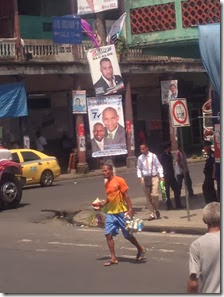 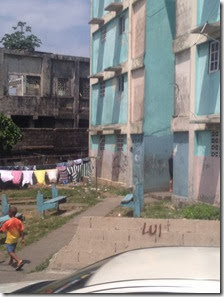 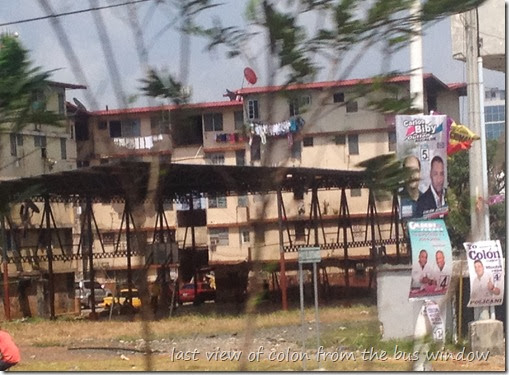 It was a relieved pair that taxied back to the bus station and got on the bus to Panama City.  Only one more parcel to go but we’ve been guaranteed that will be here on Saturday morning – so it’s Galapagos here we come!  I say that tongue firmly wedged in cheek as we’re used to things not going right!  We plan to head to the Las Perlas islands for a few days to wait for wind…..you can check our daily progress on www.blog.mailasail.com/yachtbandit

Posted by Brenda Webb and David Morgan at 02:30