The magic of Chichicastenango

After a full on six day week at Spanish language school – four hours of lessons and about the same studying – we needed a break.  The amazing market at Chichicastenango provided that, as well as a chance to try out our new language skills.  First up, a reasonable , if basic, conversation with the bus driver, who even seemed to understand us – great. 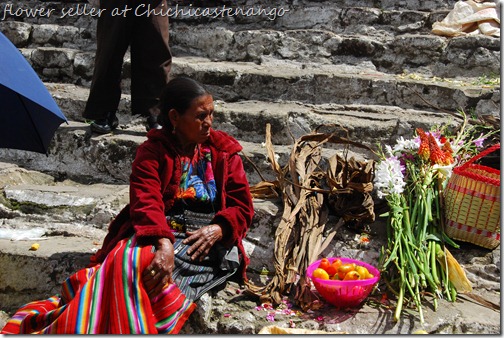 Chichicastenango, in the western Guatemalan highlands, is an amazing place to visit.  The market is one of the biggest and most fascinating  in central America  and is held every Thursday and Sunday.  Hundreds of Mayan traders from outlying pueblos (villages) head for Chichicastenango to sell textiles, jewellery, leatherware and produce.  The market deservedly attracts hordes of tourists - oh well, nothing to do but join them!  And yes it is a mad crush but lots of fun. 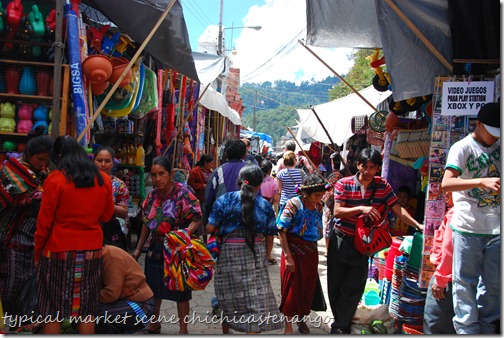 Stalls overflow with some of the most intricate and amazing textiles we’ve ever seen - all done by hand and a single piece can take months.  With Guatemala being such a poor country, prices are incredibly low and sometimes it feels wrong to bargain….but that’s how it’s done here. 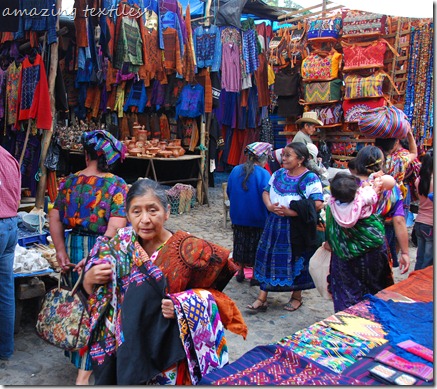 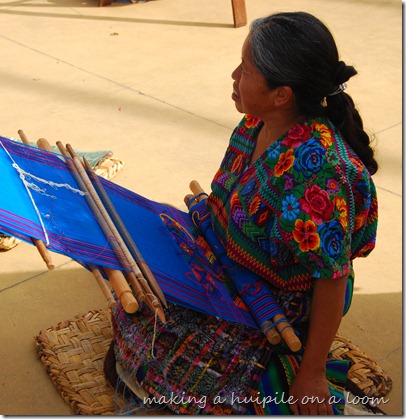 Many are made from women’s huipiles, the stunning blouses Guatemalan women make in colours and designs unique to their pueblo.  Some huipiles are made on a basic loom, others embroidered by hand. 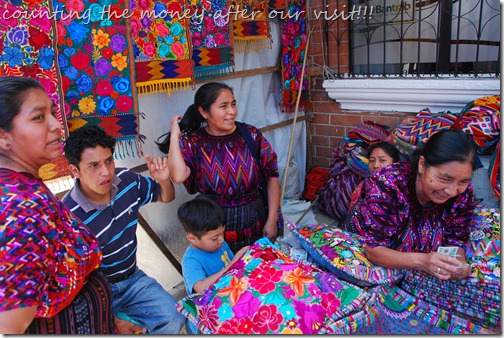 The colourful huipiles are truly eye catching and worn proudly by women of all ages, even small girls. 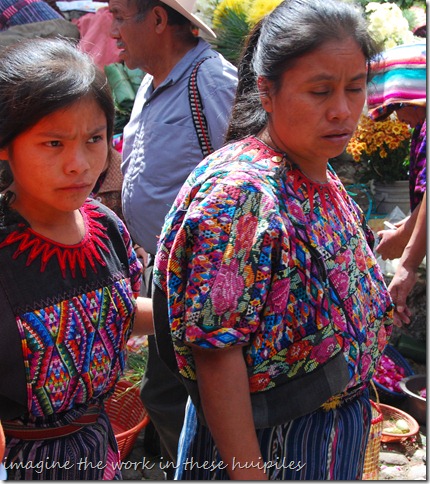 We did a day trip to Chichicastenango, which is about 150km northwest of Antigua.   We endured yet another hair raising bus ride.  On one particularly winding and narrow stretch of road a chicken bus pulled out to pass a stream of traffic (including us) forcing oncoming traffic to brake and swerve violently.  A few minutes later a ute carrying stacked up coffins passed….divine intervention perhaps? 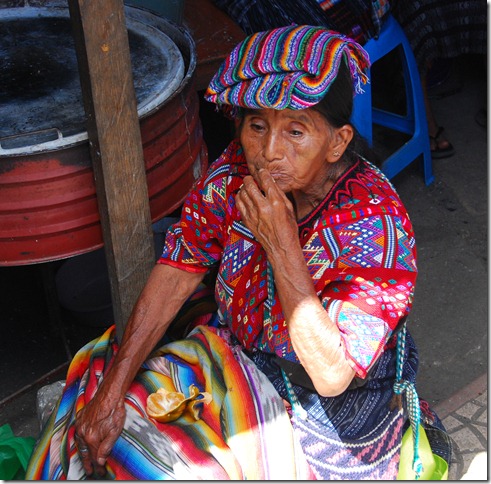 Iglesia de Santo is the landmark in the market and dozens of indigenous women sell flowers here while prayer leaders swing containers with incense.  It’s colourful and ethereal. 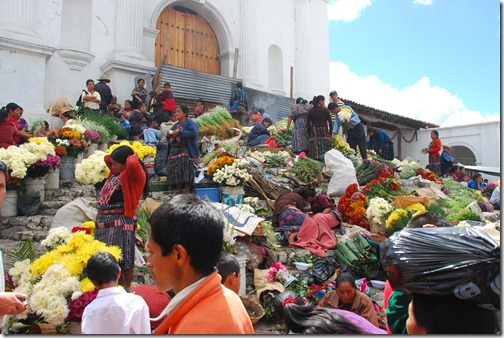 Unfortunately the church itself was closed with hunks of rather unattractive corrugated iron barring the front door.  From the church we headed into the middle of the market where all sorts of creations were being chopped, boiled, grilled, steamed and barbecued.  It smelt incredibly good regardless of the non existent hygiene standards. 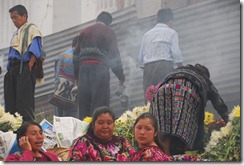 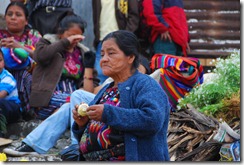 Everywhere we looked there were colourfully dressed women, smiling faces and those amazing textiles.  It was wonderful to see these people holding so strongly to their traditions and customs. 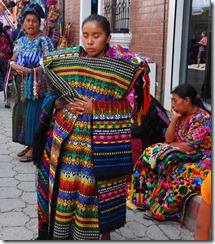 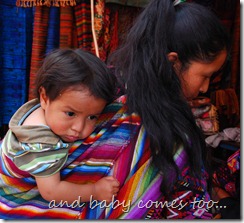 After another week of language school in Antigua, we decided our frazzled brains had had enough.  There are only so many verb tenses you can retain.  We were fine in the present, but delving into the past and future tenses has confused us - we now need to get out there and put into practice what we’ve learnt.  And keep studying of course. 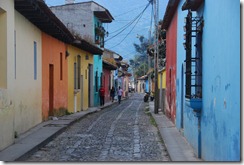 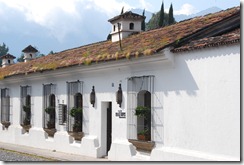 We spent our final few days in Antigua soaking up the sights – it really is a fantastic place to just wander and absorb.  Despite being here for three weeks we still hadn’t seen everything. 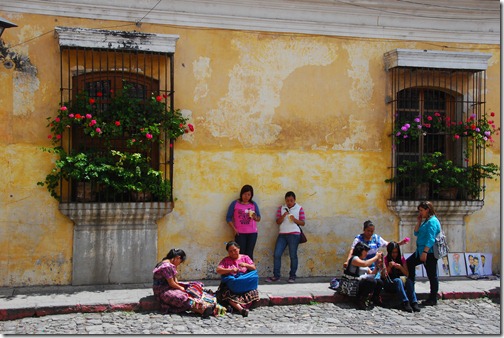 We had planned to do a trip to the volcano Pacaya but unfortunately it was cloaked in mist and cloud.  And, unlike Fuego, it’s not active at the moment so not such a spectacular sight as it may have perhaps been. 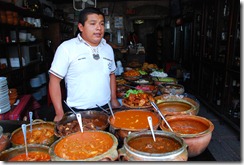 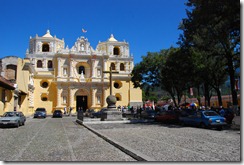 Now we’re heading to Guatemala City to get our American visas for next year before heading down to Bandit for a few days – mainly to unload all the textiles we’ve bought!  Then it’s Honduras and Nicaragua. 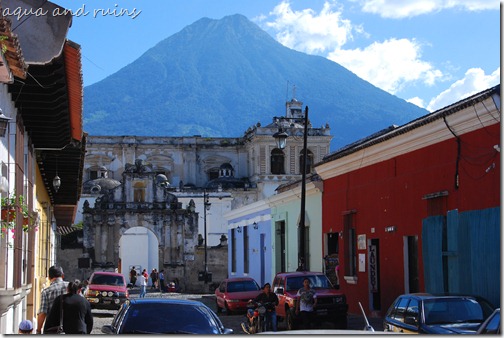 Posted by Brenda Webb and David Morgan at 03:34